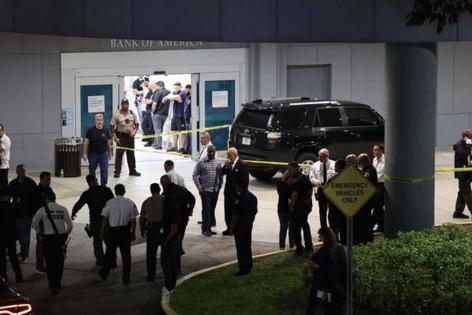 MIAMI — Cesar Echaverry, a Miami-Dade robbery detective on life-support for two days after a shootout with a suspected armed robber left him brain dead, died Wednesday night when doctors removed the ventilator that had been keeping him alive.

“It is with great sadness and heavy hearts that we announce the untimely passing of Officer Cesar “Echy” Echaverry,” Miami-Dade Police Director Alfredo “Freddy” Ramirez wrote on Twitter. “Surrounded by loved ones, Echy succumbed to his injuries after a brief battle for his life.”

Echaverry, the first Miami-Dade officer to be killed in the line of duty since 2011, will receive full honors during a memorial service in the coming days. His name will also be etched into a limestone wall at the National Law Enforcement Officers Memorial in Washington, D.C.

Miami-Dade Mayor Daniella Levine Cava, who spent time at the hospital consoling family and friends of the officer’s up until his death, said she was “heartbroken” to learn he had died.

“He laid down his life to stop a violent criminal and we will be forever grateful for his selfless service and sacrifice to our community,” the mayor said in a prepared statement. “Echy, as he was lovingly known to his police family, will be remembered always for his courage, his sense of duty and his unwavering dedication to keeping our residents safe.”

Echaverry had been breathing through the machine since Monday night, when fellow officers rushed him to Jackson Memorial Hospital after he was shot in the head. His suspected shooter, Jeremy Willie Horton, 32, was killed in an exchange of gunfire. A man suspected of partnering with Horton on a convenience store robbery in Dania Beach was killed by Miami police serving a warrant at a Miami Springs hotel on Tuesday.

Echaverry, a five-year veteran, spent the past two years working some of the toughest neighborhoods in Miami-Dade as part of an elite robbery unit. He is survived by his fiancee and parents. He was 29. His passing was announced by Miami-Dade Police Wednesday evening on Twitter.

“Officer Echaverry died in the line of duty while serving and protecting our community,” Ramirez wrote. “Our law enforcement family will continue to stand beside and support the Echaverry family through this difficult time. We’ll never forget officer Echaverry’s bravery and sacrifice.”

Echaverry was shot early Monday evening in Liberty City after his unit and fellow officers with the Robbery Intervention Detail cornered the suspect at a Liberty City intersection, but failed to detain. Police said Horton refused to get out of his car and somehow rammed his white Hyundai into several unmarked police vehicles and escaped a perimeter.

A short chase ended after Horton crashed into a car with three civilians, then rammed the Hyundai into a pole. He got out of the car and ran and was followed by at least three Robbery Intervention Detail officers. During an exchange of several dozen shots, Echaverry was hit in the head and Horton was killed. Officers rushed Echaverry to the hospital in a black SUV.