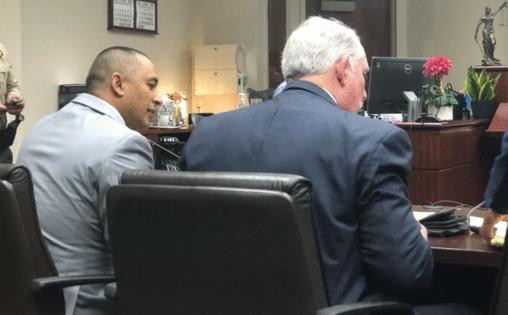 RIVERSIDE, Calif. — A former Los Angeles police officer whom authorities in Riverside County declined to charge after he fatally shot an intellectually disabled man and wounded his parents at the Costco in Corona will stand trial on charges brought by the state after a judge ruled Monday, Aug. 15, that there was sufficient evidence that the volley of 10 shots was not fired in self-defense.

Salvador Alejandro Sanchez, 31, was charged by the state Attorney General’s Office with voluntary manslaughter in the June 14, 2019 death of Kenneth French, 32, and two counts of assault with a firearm in the shooting of Russell French, now 61, and Paola French, 62. He has pleaded not guilty to all charges.

Sanchez’s attorney, Michael D. Schwartz, cross-examined prosecution witnesses but did not call any witnesses of his own during the three-day hearing in Riverside nor make a closing argument to Diaz. Testimony showed that Kenneth French knocked down Sanchez with a hard, unprovoked punch to the back of his head as Sanchez held his young child.

After the hearing, in an interview, Schwartz noted the far lower standard of proof required at preliminary hearings than at trials.

“If these cases have shown us anything historically, it’s that people should withhold any determination until all the facts come out at trial,” he said.

When Sanchez was charged in August 2021, an investigator for the state wrote: “A reasonable and objective fact-finder would likely conclude that nothing about the aforementioned circumstances would make it appear to a reasonable person — particularly one with knowledge similar to Sanchez’s as a trained police officer — that he or she was in imminent danger of death or great bodily injury after being struck and that firing a gun at Kenneth French was necessary to prevent further injury.”

But Riverside County District Attorney Mike Hestrin, despite later saying “I could not clear this officer of any wrongdoing,” declined to file charges and instead asked the Grand Jury to examine the case, partly because of the panel’s authority to subpoena witnesses who wouldn’t talk to D.A. investigators. The Grand Jury then did not indict Sanchez.

Hestrin denied giving Sanchez preferential treatment. Corona police never arrested Sanchez, who identified himself as a police officer at the scene. An officer’s body-worn camera video showed that Sanchez initially identified French as the shooter and did not immediately say he fired as well.

The LAPD fired Sanchez after its investigation. In a civil case, a federal jury in October awarded $17 million to Kenneth French’s estate and his parents.