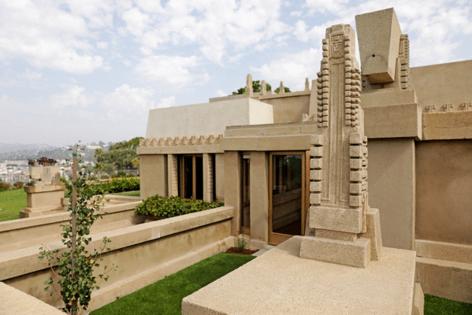 The landmark home in East Hollywood's Barnsdall Art Park was closed for more than two years because of the COVID-19 pandemic.

The Los Angeles Department of Cultural Affairs used the hiatus to complete a series of restoration and improvement projects at the home, which was commissioned in 1918 by oil heiress Aline Barnsdall.

The home's monumental fireplace, which brings together the four classical elements of earth, air, fire and water, has been restored, as have the art-glass balcony doors in the master bedroom.

Two Wright-designed sofa tables, which the architect had said he considered "part of the house design itself," have been reinstalled.

The improvements also included a major restoration of a guest house, known as "Residence A." A cantilevered balcony on the north side of the structure, which had fallen away, has been fully re-created, with a steel frame to ensure its longevity. Exterior finishes long covered by multiple layers of paint have been restored to Wright's original vision, including art stone that wraps around the building.

The Chicago-based architect increased his visits to Los Angeles as he traveled to Tokyo, where he designed the Imperial Hotel. Along the way, he met Barnsdall, a philanthropist, theater producer, political progressive, world traveler and lover of the hollyhock flower. Wright agreed to incorporate the floral element into his design for the house.

The result, Los Angeles Times architecture critic Christopher Hawthorne wrote in 2017, "is a transitional work in many respects — a bridge between the scores of charismatic Prairie Style houses he'd designed in the Midwest and the starker architecture he'd turn to once he was fully established in Los Angeles." Hawthorne and other critics also noted the nods to Mayan and Spanish Revival architecture.

Barnsdall and Wright famously feuded over the construction of the home and what she perceived as design flaws. The architect later said Barnsdall was his "most difficult client." She never lived in the Hollyhock House and donated it to the city of Los Angeles in 1927.