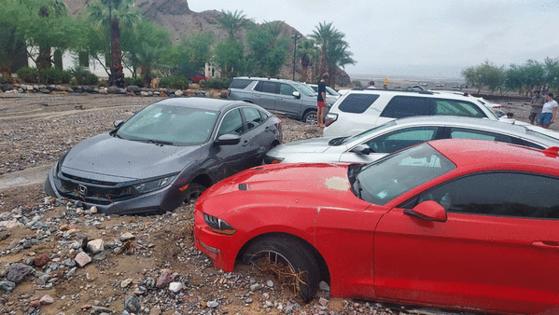 Photographer John Sirlin was in a canyon in the northeast part of Death Valley National Park late Thursday to shoot lightning in an expected thunderstorm.

Then the lightning petered out and the storm became a nonstop torrential downpour that lasted for hours, bringing near-record rainfall to one of the hottest, driest places on Earth.

“It seemed serious,” said the 46-year-old from Chandler, Arizona, who also leads storm-chasing workshops. “It was a magnitude of flooding I had not experienced before.”

More analysis will be needed to determine whether climate change helped drive the storm’s intensity. But its extreme nature is consistent with what can be expected as global temperatures rise, experts said, drawing parallels with the historic flooding that damaged Yellowstone National Park in June.

“We’re already in a climate where the odds of intense precipitation are elevated,” said climate scientist Noah Diffenbaugh, a professor and senior fellow at Stanford University. “And we have a clear understanding that as global warming continues, the heavy precipitation events are likely to continue to intensify overall.”

Rainfall totaling 1.46 inches was recorded at Furnace Creek Visitors Center on Friday, surpassing the daily record of 1.10 inches set in 1936 but falling just short of the park’s heaviest rainfall of 1.47 inches on April 15, 1988, said Brian Planz, a meteorologist with the National Weather Service in Las Vegas.

Death Valley has averaged about 1.96 inches of precipitation per year since record keeping began in 1911, according to the Western Regional Climate Center. Nearly 75% of that amount fell in the space of a few hours on Friday.

Videos posted to social media showed roads turned to rushing rivers that uprooted trees, overturned boulders and flooded park facilities. Dumpsters careened into parked cars, and cars collided with one another, the National Park Service said. At one point, about 1,000 residents and visitors were trapped in the park due to the rising waters and debris, according to officials.

“Where it really got crazy was between 4 and 4:30,” Sirlin said. “We went from having a little bit of water running through the dips and washes, water a couple of inches deep, to suddenly you could hear the sound of rocks and boulders.”

Traveling with his corgi, Aspen, he drove to Badwater Road near Highway 190 and waited it out in his car there.