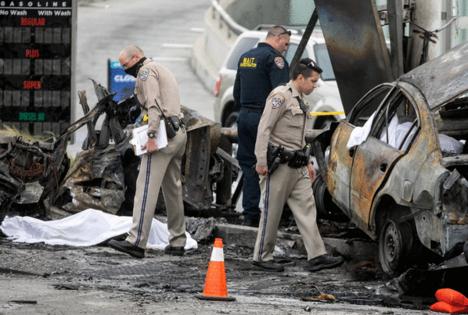 LOS ANGELES — A registered nurse has been arrested and will be booked on vehicular manslaughter charges in the fiery Windsor Hills crash that killed five people, including a pregnant woman, law enforcement sources confirmed to the Los Angeles Times on Friday.

Investigators have arrested Nicole Linton, 37, who they said was driving the speeding Mercedes-Benz that smashed through traffic at the intersection of La Brea and Slauson avenues. Linton is currently in the hospital and is cooperating with California Highway Patrol investigators, sources said.

The news of her arrest came as the medical examiner released the name of the pregnant woman who died, Asherey Ryan, 23.

Ryan, 8 1/2 months pregnant, was with her boyfriend on her way to a doctor’s appointment when the Mercedes crashed into their car. She and her boyfriend died, as did their 1-year-old baby and Ryan’s unborn child, according to Ryan’s sister. The county coroner has not yet released official identifications of anyone besides Asherey Ryan.

“I already cried. I cried. I didnt sleep one bit. I’m all cried out,” Sha’seana Kerr, who identified herself as Ryan’s sister, said on Instagram. “We have to bury four people.”

When Kerr saw the video of the crash shortly after it happened, she knew something was not right.

“As soon as I see that video, it hit home, it hit different. I felt connected,” she posted. “Her taking my sister my nephews my brother in law. She took my son’s only cousin. We are so deeply hurt.”

Authorities are checking Linton’s bloodwork to determine if she was under the influence at the time of the crash, according to two law enforcement sources.

She is to be formally charged by the Los Angeles County district attorney on Monday. A family member of Linton’s declined to speak to a Times reporter on Friday.

Linton is likely to be charged with killing the unborn child as well as the five others.