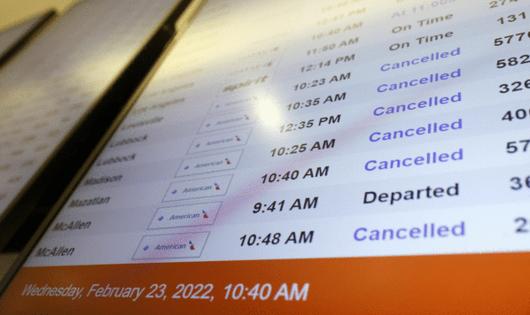 Airlines canceled more than 1,260 U.S. flights Friday as thunderstorms stretched from the Ohio Valley to the mid-Atlantic, with threats of flash flooding in some areas by evening. About 5,390 flights were delayed.

The New York and Washington areas were among the most affected by the service disruptions. The Federal Aviation Administration blocked departing flights headed for New York’s LaGuardia, Newark Liberty International, Ronald Reagan Washington National and Dulles International airports for part of the afternoon, and warned about delays extending to as long as 103 minutes through the evening.

Departure delays of at least 45 minutes also were reported at Boston Logan, Baltimore/Washington International and Philadelphia International, according to the FAA. National Weather Service forecasts showed conditions weren’t expected to improve much through the weekend, with rain, some thunderstorms and potential flash flooding extending into Sunday.

About 23% of flights were canceled at LaGuardia Friday, followed by 22% at Reagan and 17% at Newark, according to FlightAware.com. American Airlines Group Inc. canceled 232 flights, or about 7% of its schedule, as of 5 p.m. New York time Friday, FlightAware data showed. JetBlue Airways Corp. grounded 5%, while Southwest Airlines Co. and Delta Air Lines Inc. canceled 3% each and United Airlines Holdings Inc. was at 2%.