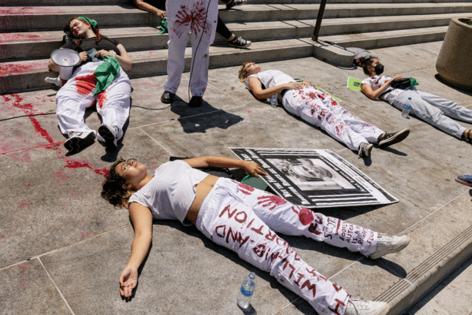 SAN CLEMENTE, Calif. — The San Clemente City Council is set to consider a resolution in a couple of weeks that would declare the city a "sanctuary for life," making it an abortion-free zone.

The resolution, which was written and proposed by Councilman Steven Knoblock, states that the City Council "considers life to begin at conception" and stands against the establishment of Planned Parenthood health centers or as well as any other clinics where abortions are performed.

"There probably isn't a family in America that hasn't been impacted by abortion," Knoblock said. "The (resolution) will get people thinking about what society has been doing for 50 years."

The resolution, which will be discussed at the next council meeting on Aug. 16, doesn't provide specific enforcement measures but does state that the resolution will be enforced by all of the "power and authority" of the council.

It also provides an exception for abortions in cases in which the mother's life is at stake and in cases of rape or incest, stating that the council will remain neutral.

The mention of "God" is included multiple times throughout the resolution.

"We believe that life is God-ordained and God is the author and finisher of every life. No matter if at the beginning or at the end," the resolution states. "As a city council, we will protect and sustain life at every stage. As we ask God to bless America, we first have to honor and respect God."

A draft of the resolution, which hasn't been officially published by the council, began making its way throughout the city, enraging many community members. Andrea Schmidt, the public affairs project manager for Planned Parenthood in Orange and San Bernardino counties, is currently leading efforts to mobilize against the resolution.

As of Tuesday, 15 people "and counting" are scheduled to speak at the next council meeting, Schmidt said.

"Politically focused and scientifically inaccurate resolutions like this are extremely dangerous," Schmidt said. "If this resolution does pass, it will send a message to San Clemente residents that their local government does not support their fundamental right to control their own body and access quality, affordable health care."

MIAMI — A fire alarm company, a security alarm monitoring firm and a swimming pool contractor settled for about $1 million each in the Surfside condominium collapse class-action case, according to a Miami-Dade circuit ...Read More

LAS VEGAS — Vice President Kamala Harris touted administration accomplishments including the passage of a bill to combat inflation and another to make computer chips in the United States during a daylong visit to Las ...Read More

COLUMBIA, S.C. — Attorneys for an autistic teen who was allegedly stunned with a stun gun 17 times by a former Pickens County sheriff’s deputy filed a civil lawsuit against the deputy and the Pickens County Sheriff’s...Read More

LOS ANGELES — Authorities investigating the crash in the Windsor Hills neighborhood that left five people dead are trying to sort out the actions and mindset of the nurse who prosecutors say plowed her Mercedes into the ...Read More