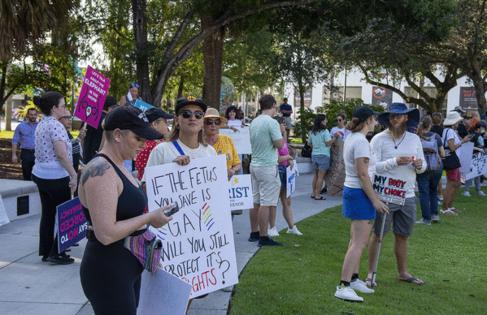 They aren’t sure exactly how or exactly when, but LGBTQ+ people know one thing about the Dobbs decision that reversed Roe v. Wade: If six people with lifetime appointments to the country’s highest court could overturn a precedent that was in place for nearly 50 years, there’s nothing stopping them from going after Obergefell v. Hodges, the case that established marriage equality in the U.S..

Justice Clarence Thomas indicated as much in a concurring opinion released when the court overturned Roe v. Wade last week. He argued the Supreme Court “should reconsider” all its past due process precedents, “including Griswold, Lawrence, and Obergefell” — the three cases codifying rights to contraception access, same-sex relationships and same-sex marriage.

For months, Florida’s LGBTQ residents have fought back against law after law that chipped away at their rights a little here and a little more there. Now they’re worried that the decades of work they put into fighting for the right to marry could be taken away from them just like that. That their marriages will be here one instant and suddenly gone in a flash.

“You just don’t imagine constitutional rights, once they’re won, would ever be taken away,” said Todd Delmay, one of the first people to marry someone of the same sex in the state of Florida in 2015. “To see Roe fall, we’re very concerned. Not only for our family, but for every child growing up that has been able to see the possibility of forming their family how and when and if they want to.”

The legal battle Todd Delmay and his husband Jeff Delmay went through inspired Todd to run for public office. He’s running for state representative in Florida House District 100, and while knocking on doors for his campaign the last few months, he said he’s heard firsthand from LGBTQ+ couples, parents, and teachers how the state’s new anti-LGBTQ+ laws have struck a chord in the community.

One such law, called the Parental Rights in Education law but known among critics as Don’t Say Gay, goes into effect Friday.

“People are very well aware of it,” he said. “It’s already been a year where we have felt under attack, now coupled with the trans sports ban and the Florida Department of Health taking away care for trans youth, it’s just one thing after the other.”

Delmay and his husband started campaigning for marriage equality in Hollywood as far back as 2008, when Florida Amendment 2 was added to the state’s constitution. Amendment 2 defined marriage as a union between one man and one woman, and effectively banned same-sex marriage.

“When you talk about same sex marriage, we went through what was a terribly painful process in 2008,” he said. “It was painful to drive around our neighborhood and see neighbors supporting that kind of movement.”