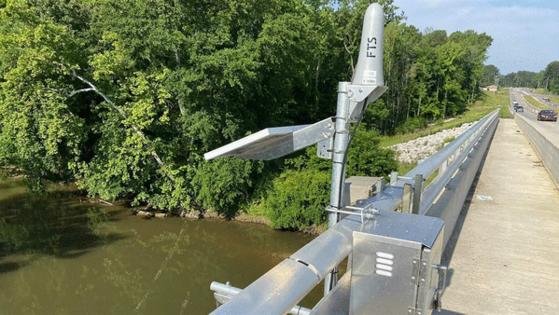 When Hurricane Florence struck North Carolina in 2018, 11 people there died from freshwater flooding — all of them in cars.

The storm also caused 2,500 road closures in the state, including parts of Interstates 95 and 40, which were shut down for more than a week because of flooding. The state estimated bridge, culvert and road washouts as well as other transportation infrastructure damage at more than $227 million.

This year, with hurricane season underway, a new advanced warning system will alert North Carolina officials in real time which specific roads and bridges are likely to flood soon, so the state can prepare and warn the public.

The network of river and stream gauges will, ideally, allow the Department of Transportation to prevent people from driving on flooded roads and help officials to respond more quickly and get roads reopened.

“The primary reason is to save lives. A lot of deaths occur because of drowning and flooding, rather than wind,” said Matt Lauffer, the transportation agency’s hydraulics design engineer. “The other part is to help the department prepare for, respond to and recover more rapidly from extreme events. We can get resources to places where roads are flooded.”

Nearly a dozen states are using such real-time monitoring to assess potential flooding at specific bridges or roads, according to David Claman, a hydraulic engineer for the Federal Highway Administration.

Although states and cities have used real-time flood gauge monitoring for years, the need for hyperlocal warnings only will grow because of climate change.

Two states — Colorado and Maryland — are doing advance flood monitoring for roads because of environmental changes, Claman said in an email. In Colorado, wildfires have significantly increased the runoff and debris for streams, and in Maryland, coastal roads are at risk because of the rise in tides.

In Fort Worth, Texas, for example, residents can see real-time flood warning risk level information at monitored low-water road crossings so they can protect themselves from hazardous flood conditions.