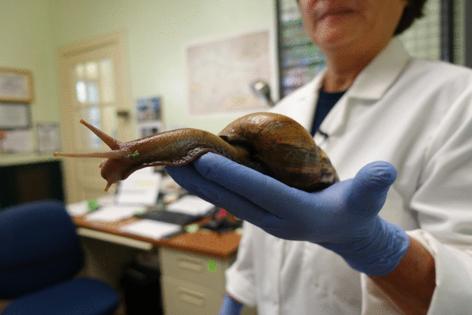 The giant African land snail gobbles up plants and can carry a parasite known to give people meningitis, according to the Florida Department of Agriculture and Consumer Services.

The state last week confirmed the sighting. The snail was found in the New Port Richey area. The agency said it would start putting snail bait on properties within about 600 feet of where the snail was spotted.

The snails can grow to be about the size of a fist, according to the U.S. Department of Agriculture. They eat many plants, including peas, beans and cucumbers. But if they can’t find enough vegetation, the federal agency says, giant African land snails will eat paint or stucco off a house.

Giant African land snails spread around South Florida in the late 1960s and early 1970s, according to the U.S. Department of Agriculture. Getting rid of them cost $1 million and took several years.

The snails were found again in Miami-Dade County in 2011, according to the state, and were only declared eradicated last year. Removing them entailed destroying more than 168,000 snails and countless eggs, according to the federal agriculture agency. The work cost about $24 million, officials said.

Investigators believed that outbreak began when a religious leader and his followers smuggled snails into the United States. He reportedly encouraged them to drink the snails’ mucus.

Giant African land snails threaten people because they sometimes carry rat lungworm, a parasite known to cause meningitis, according to the Department of Agriculture and Consumer Services.

Anyone who touches slugs or snails should use gloves and wash their hands.

Residents who believe they have spotted a giant African land snail and want confirmation can email DPIHelpline@FDACS.gov, according to the state.