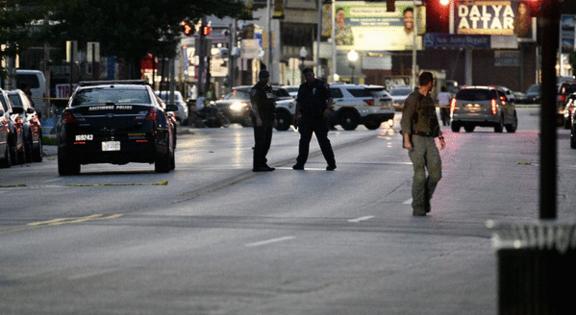 BALTIMORE — Baltimore Police arrested Joseph Black late Wednesday morning a little more than half a day after officials alleged he accelerated his vehicle while engaged with a Baltimore police sergeant during a traffic stop Tuesday night, dragging the officer about two blocks and leaving him badly injured.

Black, 36, barricaded himself in a West Baltimore home Wednesday morning, causing an hourslong standoff with police, but was taken into custody without incident, police said.

He was armed during the traffic stop and later confessed to striking the officer, officials said. Police did not release what charges Black may be facing Wednesday afternoon.

Police Commissioner Michael Harrison would not say what traffic violation Black committed that led to the stop, only that body camera footage showed some of it. The department did not release any footage from the stop.

The injured officer, whose name has not been released, was on life support Tuesday night, but officials said Wednesday he was in fair condition recovering from surgery at the University of Maryland Shock Trauma Center. The sergeant suffered broken bones and head trauma, police said.

Before Black’s arrest, a memo sent out to local law enforcement identified him as the driver and said he was “considered armed and dangerous.” It said Black also was a suspect in a recent homicide: the killing of Darrell Fulton, who was shot June 14 in the 3100 block of Spaulding Avenue in Park Heights near Pimlico. Fulton died three days later from his injuries, according to police.

Court records show Black had been freed from jail late last year after pleading guilty in two separate cases. Both times, he was arrested on attempted murder and other serious counts, then took a plea deal and was convicted of illegal gun possession — a much lesser charge that allowed him to be released on time served and placed on probation.

“When we talk about repeat violent offenders, this is what we are referring to,” Harrison said. “Black has been arrested at least 19 times as an adult with little or no regard for consequences.”

Tuesday night, Harrison said, the injured officer, a Northwest District sergeant and 27-year veteran of the force, was making a traffic stop minutes after 8 p.m. in the 5100 block of Park Heights Avenue in the Central Park Heights community when he “became engaged with the vehicle” and was dragged for about two blocks.