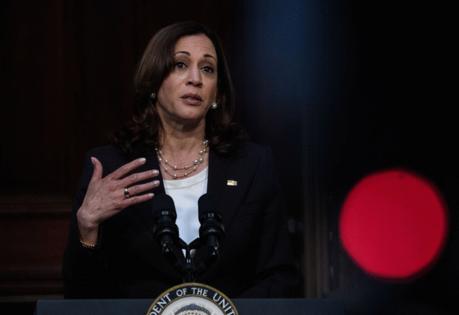 WASHINGTON — Vice President Kamala Harris said Monday that the Supreme Court’s decision to overturn Roe vs. Wade, the landmark decision legalizing abortion, is likely to endanger other rights, including those of gay marriage and birth control.

She said Justice Clarence Thomas, who cast doubt on those rights in a concurring opinion, was merely saying “the quiet part out loud” as the court’s conservative wing increasingly asserts itself.

“I definitely believe this is not over,” she said in a CNN interview, her first one-on-one since the Supreme Court issued its historic 5-4 abortion ruling.

Harris is emerging as a leading advocate of the administration on abortion rights. The issue has angered Democrats who are scrambling to find ways to counter Republican efforts to restrict and ban abortion in various states in the wake of the Supreme Court decision.

The vice president, in the interview, said she was on Air Force Two when the announcement came, on her way to Aurora, Illinois, to showcase the administration’s policies dealing with maternal health. She said she was shocked when she learned the news and followed coverage on her plane’s television.

“They actually did it,” Harris recalled thinking at that moment. “The court actually took a constitutional right that has been recognized for half a century and took it from the women of America. That’s shocking.”

Harris pledged to do everything she could to fight for women who seek abortions. But she declined to endorse altering the Senate’s filibuster rules to allow a simple majority to codify abortion rights nationally. And she said the administration is not discussing plans floated by some groups that would involve using federal lands to perform abortions in states that have outlawed the procedure.

Instead, she said the administration is focusing on maintaining the availability of drug-induced abortions and ensuring low-income women have the ability to travel, if needed, to states that allow doctors to perform them.

Harris said the Biden administration is considering using travel vouchers for low-income women who may need to travel out of their home states to seek medical care. She pointed out that many such women cannot afford to make such trips because they also must pay for child care and other expenses.