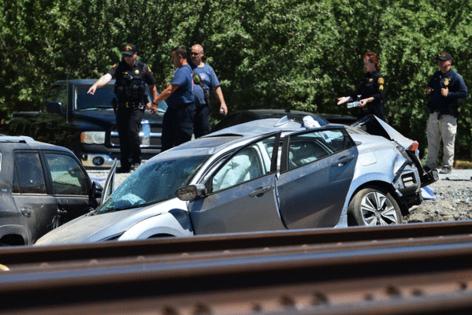 SAN JOSE, Calif. — Three people died and at least four others were injured when an Amtrak train slammed into a car Sunday afternoon near Brentwood, sending it careening off a long dirt driveway and into another vehicle, a California Highway Patrol officer on scene said.

The crash happened about 1 p.m. as the car pulled into a long rural dirt driveway leading to a long rural dirt driveway near the intersection of Orwood Road and Bixler Road in eastern Contra Costa County, at a private crossing with no railroad crossing adjacent to it, according to a BNSF Railway spokesman. Three women — all women over the age of 50 — died, said Battalion Chief Craig Auzenne of the East Contra Costa Fire Protection District.

A child and two men also were hospitalized with severe injuries, Auzenne said. One other person suffered moderate injuries.

The gruesome scene played out a mere 300 feet from an outdoor fundraiser for a Brentwood resident who died less than a week ago, said Fatima Jimenez, who was one of the people there to mourn the dead.

Firefighters had already been called to the fundraiser to help someone who had fainted, Auzenne said. But the crash happened as they were responding and they arrived to find the carnage of the wreck, he said.

Jimenez said she ran out of the fundraiser thinking it was her brother’s vehicle that was hit. She arrived to find two women dead on the ground, along with a bloodied child. She helped someone else pull a man from the twisted wreckage of the car, and he appeared to escape major injury.

To have it all happen so close to a crowd of mourners left Jimenez speechless.

“People fainted when they heard what was going on,” Jimenez said. “It was chaotic. There are no words to describe it — I’m still in shock.”

The vehicle, a four-door sedan, was going north on the driveway toward the fundraiser when it was hit by a westbound Amtrak train, Auzenne said. The vehicle barreled off the tracks and into a parked SUV about 60 feet away.

Hours afterward, at least two bodies were seen lying on a gravel embankment, about 25 feet from the vehicle.