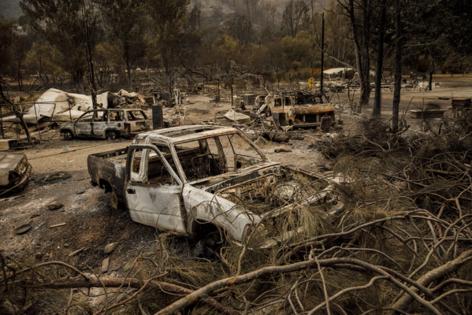 LOS ANGELES — The sheer acreage consumed by fire in California in recent years is numbing: more than 2.5 million acres last year, and 4.3 million acres the year before that.

Already in 2022, before peak fire season has descended upon this drought-parched state, fire has burned nearly 17,000 acres.

Yet not all fires are equal. New research from UC Irvine shows that fires caused by human activity — be it arson, a neglected campfire, sparking electrical equipment or ill-conceived gender reveal parties — spread faster, burn hotter and destroy more trees than those caused by lightning strikes.

"The physics behind the fire is of course the same, but humans increase the risk of having these kinds of ignitions at really bad times during the year," said Stijn Hantson, the study's lead author. A project scientist in the lab of UCI Earth systems professor James Randerson at the time of the study, Hantson is now an Earth systems scientist at Universidad del Rosario in Bogotá, Colombia.

Wildfires are a natural part of a forest ecosystem and have been around longer than humans. But nature tends to start fires in less combustible conditions than humans do.

Longer droughts and higher temperatures have dried out vegetation and turned fire season into a year-round event. At the same time, humans have moved ever farther into previously unoccupied land that is more primed than ever to ignite.

Lightning typically happens in humid conditions and is often accompanied by rainfall, both factors that dampen the growth of naturally occurring fires. But people light campfires, flick cigarettes and use machinery all year long, including when it's dry and windy out.

"This is a nice and timely study that highlights more of the nuances of wildfire in the state," said John Abatzoglou, a UC Merced climatologist who was not involved with the new research but has studied the effects of climate on wildfire.

"Most of the notorious fires the state has seen in the past several decades have been human-caused fires that are coincident with dry and very windy conditions," Abatzoglou said. "These conditions often render fire suppression less effective or dangerous to fire-suppression operations."

For the UCI study, researchers created a database of all 214 fires in California from 2012 to 2018 that could not be contained within the first 24 hours. Of these, 42.1% were caused by lightning strikes, 39.3% by humans and the rest by undetermined sources.

BALTIMORE — One person was killed and 14 injured during a spate of weekend violence that began Friday night in Baltimore, according to police.

Southern District officers who were in the area of the 700 block of S. ...Read More

BOSTON — A “heroic” police officer is being hailed for his quick thinking actions while out on the water Saturday afternoon when he rescued five people after their boat capsized amid rough seas.

NEW YORK — Four people, including an 8-year-old boy, were wounded when a gunman on a dirt bike opened fire on a group enjoying a Brooklyn cookout, police said Sunday.

The small barbecue was underway on Quincy Street ...Read More

SEATTLE — Eight people were shot after a fight broke out outside a rave in Tacoma early Sunday morning, the Tacoma Police Department said.

All eight individuals are in stable condition.

President Joe Biden rebooted his effort to counter China’s flagship trade-and-infrastructure initiative after an earlier campaign faltered, enlisting the support of Group of Seven leaders at their summit in Germany.