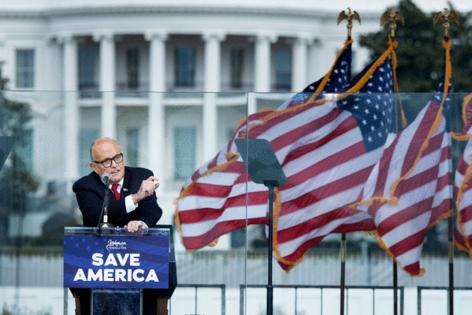 Rudy Giuliani is trying to raise money from his appearance before the House committee investigating last year’s riot at the Capitol as well as his connection to former President Donald Trump by asserting he invoked attorney-client privilege to refuse to answer some questions.

In an emailed appeal for his defense fund, the former mayor of New York and one-time U.S. Attorney said he is being unfairly targeted by the committee for defending Trump as his lawyer.

“They’d love nothing more than to take down the lawyer who successfully defended President Trump from endless witch hunts — especially when other lawyers were too afraid to go forward,” the fundraising pitch says.

He said the left “is furious that I rightly invoked the attorney-client and executive privilege that I have with President Trump.”

Giuliani was questioned virtually last Friday by the panel investigating the Jan. 6, 2021, insurrection, according to two people familiar with the matter. The committee had subpoenaed Giuliani in January, and the two sides had been negotiating ground rules for his appearance.

Guiliani said the session lasted nine hours. Giuliani’s attorney, Robert Costello, didn’t respond to a request for comment, nor did a spokesperson for the committee.

Giuliani is the subject of a Justice Department inquiry into his dealings in Ukraine before the 2020 election. Federal Bureau of Investigation agents seized Giuliani’s electronic devices in raids on his Manhattan home and office last year. Federal authorities also are looking into whether he lobbied on behalf of Turkish interests. Giuliani has denied lobbying for either Turkish or Ukrainian interests, and the government has not accused him of wrongdoing in either matter.

The Jan. 6 committee said earlier this year it wanted to ask Giuliani about any roles played by specific members of Congress in a scheme to stop Congress’s certification of President Joe Biden’s victory on Jan. 6 of last year.

In a letter accompanying the subpoena for Giuliani’s testimony, Committee Chairman Bennie Thompson wrote that the committee wanted to ask Giuliani about his role in urging Trump to direct the seizure of voting machines around the country as part of the plan to convince state legislatures to overturn the election results.

Other members of Trump’s circle in recent weeks also have interviewed by the committee, including Donald Trump Jr. and Ivanka Trump and her husband, Jared Kushner. The committee says it has talked to more than 1,000 witnesses, overall, as it prepares to enter a new public hearing-phase of its investigation starting June 9.