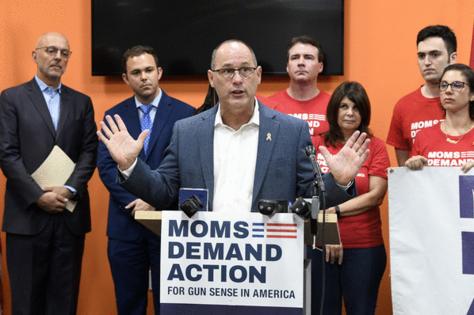 Like Nicole Hockley, whose 6-year-old son Dylan was gunned down at Sandy Hook Elementary School in Newtown, Conn., in 2012, Guttenberg found himself thrown back in time.

Jaime, 14, was shot down as she fled the gunman in the halls of Marjory Stoneman Douglas High School on Valentine’s Day 2018, in Parkland, Fla.

On Tuesday, 19 students and two teachers were killed by an 18-year-old gunman in Uvalde, about 80 miles west of San Antonio.

“It just pulls me back to a moment that is unfathomable,” a visibly weary and angry Guttenberg told anchor Chris Hayes on MSNBC Tuesday evening.

He admitted feeling pulled to comfort his wife, who was also reeling, while at the same time feeling a responsibility to speak out.

“The country needs to hear our voices,” he said of parents of the victims and the need to call for action against barely regulated gun sales. “Ninety percent of the American people want this dealt with. But there is a very specific group, and they have managed to hold the country hostage.”

He noted the slew of Texas politicians slated to speak at the National Rifle Association convention later this week, including Gov. Greg Abbott.

“They mock the issue,” Guttenberg said.

In particular he called out Kentucky Republican Sen. Mitch McConnell.