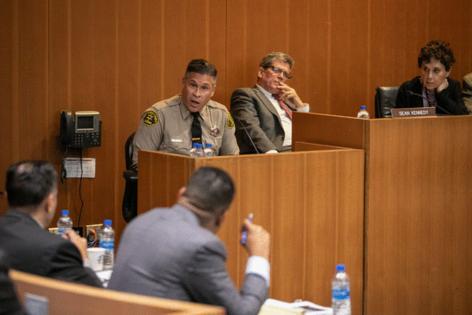 LOS ANGELES — When Sgt. Jefferson Chow started investigating a fight between deputies assigned to the East L.A. sheriff’s station, he was instructed by a supervisor to question witnesses about groups of deputies that behaved something like street gangs.

But, within a few weeks, that instruction changed. The sergeant was told questions about the Banditos or other similar groups in the department didn’t need to be part of his investigation, according to a log Chow kept.

The about-face in late 2018 came as Alex Villanueva, who had recently been elected sheriff, was beginning to exert his control over the department.

Parts of Chow’s log were made public Tuesday on the first day of public hearings that are part of an investigation into “deputy gangs” launched by the Sheriff Civilian Oversight Commission, which oversees the Sheriff’s Department.

“I believe the manner in which this case was investigated and presented amounted to a cover-up — essentially obstruction of justice,” Inspector General Max Huntsman testified at the hearing.

Chow, who did not testify Tuesday, was assigned to the Internal Criminal Investigations Bureau at the time, a unit that investigates criminal misconduct by deputies. The district attorney’s office declined to file charges in the case, but Huntsman claimed prosecutors didn’t know the full story because Chow’s investigation did not look meaningfully at allegations that deputies who instigated the fight were Banditos members.

Along with Huntsman, three others — Lt. Larry Waldie, who once led the Compton sheriff’s station, retired Cmdr. Eli Vera, who is running against Villanueva for sheriff, and an anonymous Sheriff’s Department member assigned to East L.A. station — testified under oath at Tuesday’s four-hour hearing. They were questioned by Bert Deixler, a former federal prosecutor who is leading the commission’s investigation.

The Sheriff’s Department for decades has been roiled by allegations that the groups run roughshod over several stations, controlling commanders and glorifying aggressive policing tactics.

In a statement posted to social media, Villanueva said that the hearing featured “wildly unconstitutional and bizarre theatrics.”

“This scripted and well-rehearsed political stunt was designed to influence the outcome of the election. No judge, no opposing counsel, no objections, no cross-examination, a true kangaroo court,” he said.