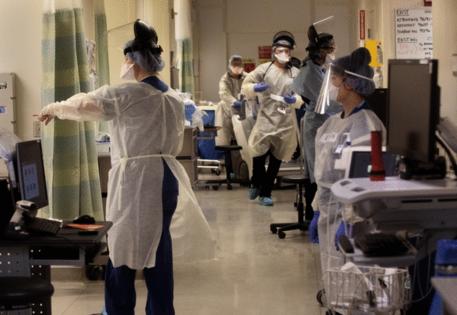 LOS ANGELES — For years, a contentious dispute between Los Angeles County's health care leaders and the University of Southern California has seethed behind closed doors, injecting tension and acrimony in the operations at one of the nation's busiest public hospitals that climaxed during the COVID-19 pandemic.

As early as 2019, officials at L.A. County-USC Medical Center in Boyle Heights began accusing USC of failing to live up to its contract obligations, where the county pays up to $170 million each year in return for USC's faculty doctors and nearly 1,000 medical residents treating some of the region's poorest patients.

The county has contended that USC repeatedly fell short of providing enough doctors under the contract while also "double-booking" its internists, cardiologists, and others — claiming they were scheduled to simultaneously treat patients at both the public hospital and the university's privately owned Keck Hospital across the street.

Last spring, the second-in-command of the county's health services agency, Dr. Hal Yee, informed USC that it had breached its contract. In scathing correspondence, Yee documented two years of meetings and reviews that he said indicated "underperformance" and "a broad lack of accountability and responsibility on the part of the university."

The complaints from the county have partly spurred change at USC, which since 2020 has installed new leaders atop the medical school and health care enterprise, replaced some physicians that directly interface with the hospital, and retained consultants to ensure compliance with the county.

But the university also fired back.

While USC has acknowledged some "areas of challenge," they've rejected the idea that a true breach of contract ever occurred. USC also lodged a host of complaints about the County, including that it responded to physicians' concerns "with hostility and demands for retributive action," resorted to threats to oust a USC administrator, ignored the university's aid to the county during the pandemic, and repeatedly highlighted past problems in a way that's "divorced from the reality on the ground."

"The continual rehashing of issues that have been resolved and attempts to escalate routine staffing issues into contractual breaches makes us question whether County's actions are simply a pretext to alter the [contract] to County's advantage," wrote Dr. Steven Shapiro, USC's top health executive, in a Nov. 8 letter.

Two weeks ago, both County and USC leaders stated that the once-fractious relationship between leaders at the two institutions had dramatically improved in recent months.

"The people at the County have accepted us and given us a chance to develop a relationship," said Shapiro, who was appointed by USC from the University of Pittsburgh last year, the same month the County declared a breach.