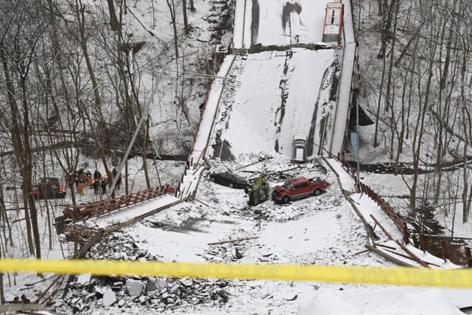 Months after Pennsylvania officials stripped crucial information about poorly rated bridges from public view, a veteran state lawmaker is pushing for databases that will alert people to the condition of thousands of spans statewide.

Concerned that the collapse of the Fern Hollow Bridge in Pittsburgh and other bridge failures are not getting the attention they deserve, Sen. James Brewster, D-McKeesport, wants the Pennsylvania Department of Transportation to create a searchable website that contains information about every bridge. It would also include quarterly updates on their conditions and ratings by whatever local government — county or city — owns the spans.

Under the plan, each local government would also be required to maintain its own separate public database with the same information in a show of transparency that could help the public better track deficiencies.

The proposal comes after a Pittsburgh Post-Gazette investigation in April revealed the state had concealed key information about the bridges — including inspection notes about the spans — in the wake of the disastrous failure of Fern Hollow in January, when nine people were injured and six vehicles fell into the ravine below.

The Post-Gazette found that the state was displaying detailed inspection notes about bridges on its website, as well as the names of the inspectors. But the state removed the notes and inspectors' names after the newspaper began asking questions about the information.

In some cases, the notes reveal glaring problems on the spans — including severe deterioration or even holes in the decks — that need to be addressed.

Though the information is now off-limits, the Post-Gazette obtained the data from the state's website and made it available in one of the first searchable databases of its kind.

Under Brewster's proposal, the state would be compelled to display the notes, which are included in every inspection report, so the public has a better glimpse of any concerns raised about the bridges, including deterioration or other breakdowns that are found during the visits. In addition, the names of the inspectors and the firms they work for would be public.

"We do need to know if a bridge is bad, why is that? If you rated it poor, why did you do that?" said Brewster, a member of the Senate Transportation Committee. "We don't need the full, 100-page engineering report and recommendations for repair in the database."

In light of the state's efforts to withhold the records, Melissa Melewsky, media law counsel for the PA NewsMedia Association, applauded the plan, saying it was a helpful step toward better transparency on bridge records.

Brewster first outlined creating the database after the Post-Gazette published a story in March that found that many local officials were baffled by a state funding process that directs state and federal funds to bridges in fair or good condition, while leaving locally owned bridges in poor condition to flounder.

He said he hoped to create an "audit" that would require all the participants in bridge maintenance and funding to sign off annually on their ongoing work. Its goals would be to secure funding to fix deteriorating bridges faster and prevent another collapse, and to avoid the shutdown of bridges like the one that took place in McKeesport a week after Fern Hollow fell.

"My goal is three years from now, you can go onto any website — Southwestern Pennsylvania Commission, Allegheny County, McKeesport, PennDOT — and see the status of all the bridges and whether they're going to be repaired and when," he said.

Brewster did not include funding agencies like SPC in his original proposal because he was still researching the plan, he said. But now he will include a provision in a bill to also require regional funding agencies such as the SPC to create a database of bridges in their regions.

In his proposed bill — which was included in a memo posted to the state Senate website — Brewster would require PennDOT to maintain its own searchable database of every bridge in the state, including quarterly updates on the bridges' status from local governments if they own the bridges.

PennDOT already has a database, part of its OneMap system, that contains some of the information Brewster wants, such as the bridge's location and current condition rating. But his bill would expand that data to include such details as information on pending bridge maintenance or reconstruction and an estimate of those costs, if known.

To highlight the information further, Brewster would also require counties, boroughs, cities and townships to maintain their own databases with the same information and to share that data to the state as well.

In his position as a member of the Senate's transportation committee, Brewster now will seek co-sponsors for the legislation and introduce the bill formally.

He said he is optimistic that he will gain support from both parties.

Legislation related to transparency for bridges "is hot right now," he said. "We'll get bipartisan support. We should be able to get this moving."