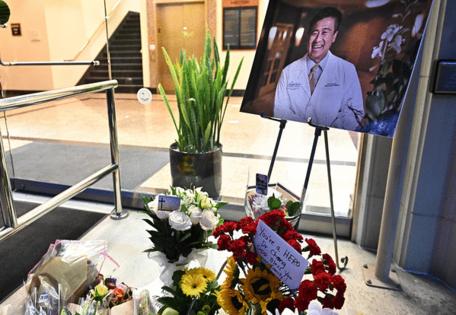 He had spent two decades pastoring the Laguna Woods congregation before moving to Taiwan two years ago. And on Sunday morning, he was back — joyfully so — as a guest preacher reading the word of God once again in a place that felt like home.

Chang, 67, knew almost all the faces in the pews. They were mostly elderly, mostly Taiwanese. They were like family.

In the crowd was one stranger, but no one gave him much thought. He was an older Asian man with gray hair. He wore a black T-shirt and sat in the back of the sanctuary, reading a newspaper throughout the sermon.

Up front, Chang read from the Book of Isaiah: Even youths grow tired and weary, and young men stumble and fall. But those who hope in the Lord will renew their strength. They will soar on wings like eagles; they will not run and not grow weary. They will walk and not be faint.

They were prescient words.

About three hours later the parishioners would have to find that strength to save their own lives when the stranger locked them in the auditorium and pulled out a gun.

The Irvine Taiwanese Presbyterian Church never had a permanent home. It was started in 1994, with about 30 worshipers using borrowed space in another church in Irvine.

The church moved a few times, always nesting within other houses of worship. In 2012, it settled at Geneva Presbyterian Church in Laguna Woods to accommodate its aging members, many of whom lived in the nearby Laguna Woods Village retirement community.