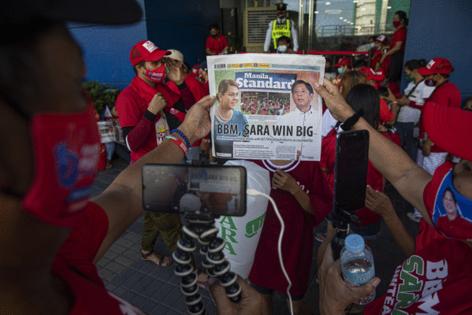 MANILA, Philippines — Ferdinand “Bongbong” Marcos Jr. and Sara Duterte joined forces to pull off the biggest Philippine election win in four decades. The question now is whether they can stay united over the next six years.

Election data shows that Marcos owes Sara Duterte and her father, President Rodrigo Duterte, for the large margin of victory. Although Marcos beat runner-up Leni Robredo by almost 31 percentage points in the May 9 election, Sara Duterte won the race for vice president by an even bigger amount.

Signs of underlying tensions emerged just days after the vote, when Marcos, 64, picked Sara Duterte, 43, as his education secretary even though she had publicly said she wanted to oversee the defense portfolio. In the end, she accepted, saying she wanted the “most harmonious administration possible” and she expected naysayers to “fabricate intrigues about her loyalty.”

Marcos was sending the message that “there’s a boundary she cannot cross,” said Jean Franco, a political science professor at the University of the Philippines who previously worked as a director in the Senate. “They were united for the purpose of winning the elections, so unless you find another purpose, the tendency is to disintegrate.”

One immediate risk is still hanging over the presumptive president: A petition to disqualify him over failing to file tax returns has reached the Supreme Court and more could come. While all these cases were dismissed by the Commission of Elections, officials have said Sara Duterte is in line to take over from him if the court rules against him. Marcos has repeatedly denied wrongdoing.

Here’s how the Duterte family helped Marcos win by a landslide:

During his vice presidential bid in 2016, Marcos won big in his family stronghold in the north but struggled with a weak showing in the south. The Duterte clan’s sway in the south helped him in this year’s race, with provinces backing Marcos nearly doubling to 64 from 33 six years ago.

President Duterte has brought a measure of peace and prosperity to Mindanao island, which is home to some of the Philippines’ poorest provinces. Under his term, the nation’s Muslim minority voted for a law that gave them greater control over an expanded region in the south.

The widespread support for the president’s clan shows that risks to Marcos’s popularity in the short term will likely come from “any falling out with the Dutertes,” Bob Herrera-Lim, managing director of political risk consultancy Teneo, said in a May 10 note.

“Over time, Marcos will hope to poach many of Duterte’s supporters, especially those who are not from the southern island of Mindanao,” he wrote.

Opinion surveys show President Duterte is the most popular president in the Philippines since Marcos’s dictator father was ousted in 1986. He maintained majority support almost throughout his five years in office as his anti-drug war resonated with Filipinos even as critics and rights groups said thousands were killed by police-run death squads.

President Duterte’s popularity helped his daughter, who swept 75 out of 81 provinces in this year’s election — far exceeding his tally of 36 in the 2016 presidential race as she pledged to continue signature policies such as the drug war and an ambitious infrastructure program.

Despite following her father’s footsteps to become Davao City mayor, Sara Duterte forged her own path on national-level politics. President Duterte’s spokesman said last June that she refused to heed her father’s wishes for her to succeed him, even as surveys showed she was the front-runner.

She ran as vice president under a party associated with former President Gloria Arroyo after what was described as a chance meeting with Marcos in Cebu in October. That decision helped Marcos became the top choice in voter surveys, with a double-digit lead over his rivals since December that he never relinquished.

“She’s new in this politics so she does not really have her base with the elite,” said Teresa Tadem, a political science professor with University of the Philippines who has written about Marcos-linked technocrats. “It’s Gloria Arroyo who will have that base and could help bring in other elites whom she works together with. There’ll be factions.”

The duo also made use of President Duterte’s election strategy of linking opponents to the inability of successive administrations to clean up corruption and ensure inclusive prosperity after Marcos’s father was ousted.

Tens of millions of Filipinos responded favorably to President Duterte’s strongman presence and made their views known on social media, leaving Marcos Jr.’s rival far behind in surveys and in the election.

With the elections over, disinformation networks supporting Marcos Jr. could shift to attacking government critics and overselling his successes, said Lee Morgenbesser, a senior lecturer at Australia’s Griffith University who has written about politics in Southeast Asia.

“It is through this prism that policy issues will be tested — the more important the policy to his government the wider and more intense the disinformation will be,” he said.