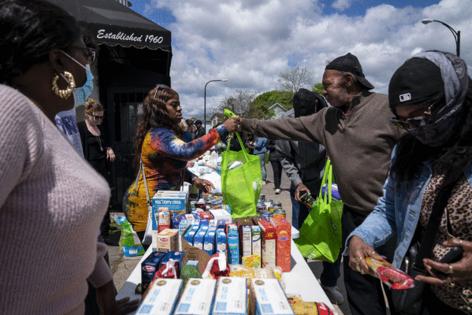 BUFFALO, N.Y. — In the fall of 2020, somebody placed an old refrigerator at Jefferson Avenue and Welker Street in Buffalo, N.Y., and plugged it into an outlet in an adjacent building.

It became a small source of pandemic relief for families in one of Buffalo’s poorest neighborhoods. Volunteers did their best to keep it stocked with donated groceries. Anybody who needed food was free to raid the fridge, or the cupboard set up beside it.

Now, in the wake of Sunday’s shooting massacre in Buffalo, the fridge has never been more important to the community.

It sits just half a mile or so from the Tops Friendly Markets store where an 18-year-old gunman motivated by anti-Black hatred killed 10 people and wounded three.

Amid their grief, the residents of Masten Park are also faced with a very practical concern that the store is closed: It was the only place for blocks to buy groceries.

“Do you have soap?” a woman — one of dozens of people still waiting in line as the sun began to set Tuesday — shouted to the volunteers who had been showing up all Tuesday at the fridge to hand out food. “Do you have dog food?”

The fridge was a sight to behold. Long ago it had been painted with a mural of black, brown and white hands touching a heart. At the top, in red and orange paint, it said, “Free food.”

“It’s a just cause,” said Gloria Smith, 61, who had come with her sister to hand out baby food, boxes of cereal, pasta and other items. “We’re all human beings, and we should try to unite and do good.”

The neighborhood is predominantly Black, but the food giveaway was a decidedly multiracial effort — with an unmistakable message that the hate that motivated the killer has no place here.

Betty Jackson, 78, who was visiting the fridge for the first time, said she was happy to see the volunteers — Black, Latino and white — working together.

BALTIMORE — Baltimore Police arrested Joseph Black late Wednesday morning a little more than half a day after officials alleged he accelerated his vehicle while engaged with a Baltimore police sergeant during a traffic ...Read More