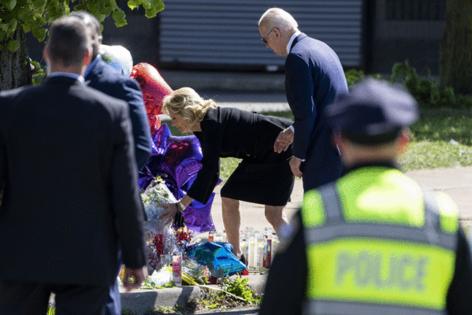 BUFFALO, N.Y. — President Joe Biden on Tuesday condemned Saturday’s deadly mass shooting in Buffalo as a “racist rampage” and an act of “domestic terrorism,” calling on Americans to reject the racist theory that authorities say appeared to have motivated the gunman to carry out the massacre.

“White supremacy is a poison running through our body politic. And it’s been allowed to fester and grow right in front of our eyes,” Biden told grieving families during an impassioned speech at a community center.

“In America,” he added, “evil will not win, I promise you. Hate will not prevail. And white supremacy will not have the last word.”

Officials say the suspected killer, Payton Gendron, wrote a 180-page document that included references to the racist and antisemitic “great replacement” conspiracy theory, which posits that a cabal of elites are engineering the replacement of whites with nonwhite immigrants.

Gendron, 18, who lived 200 miles away in Conklin, New York, has been arrested and charged in the massacre.

“I call on all Americans to reject the lie, and I condemn those who spread the lie for power, political gain and for profit,” Biden said.

The president later told reporters that those who spread such racist concepts were not to blame “for this particular crime, but it serves no purpose, no purpose, except for profit and/or political benefit.”

Before the speech, the president and first lady Jill Biden paid their respects at a makeshift memorial across the street from the Tops Friendly Markets grocery store and met with families of the victims as well as first responders.

The first lady placed a bouquet of white flowers at the memorial, which was covered with flowers, signs and candles to honor the victims. New York Gov. Kathy Hochul and Senate Majority Leader Charles E. Schumer, D-N.Y., joined Biden and other local officials at the site.

Wayne Jones Jr., the grandson of Celestine Chaney, one of the victims, said the president took questions during the private meeting.