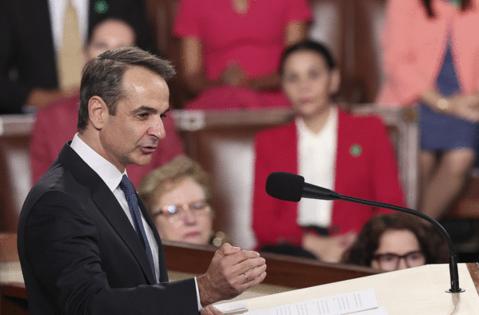 WASHINGTON — The leader of Greece on Tuesday implored Congress to take seriously internal democratic erosion in the United States, which he said was critical to confront if Washington is to maintain its global leadership role.

Addressing a joint session of Congress, Greek Prime Minister Kyriakos Mitsotakis, who was elected in 2019, referenced Athens’ own struggles with societal cohesion amid rising inequality and the spread of disinformation through social media. He is the leader of his country’s center-right New Democracy Party.

“Personally, I am more worried about the internal fragmentations of our democracies than I fear the threats of arrogant despots,” said Mitsotakis, who is the first Greek leader to address a special joint session of Congress.

“Our democracies are threatened by the sirens of populists who offer easy solutions to complicated problems,” he said. “Their voices are being heard primarily because income inequality has increased in our societies and many justifiably feel that they are being left behind. In Greece, we speak from experience, we played a heavy price for listening to them.”

Like the U.S. — which is grappling this week with the aftermath of a deadly mass shooting at a grocery store in Buffalo, New York, the latest in a spate of racially motivated gun massacres to traumatize the country — Greece has had problems with the spread of far-right extremism.

The far-right Golden Dawn Party, which rose in popularity after Greece’s 2009 financial crisis, has been banned as a criminal organization since 2020. The group at one point was the third-largest political party in the country. And violent far-right successor groups to Golden Dawn continue to find success in recruiting among the country’s young.

Mitsotakis’ trip to Washington had been planned for last year, the bicentennial anniversary of the start of the Greek War of Independence, but the COVID-19 pandemic delayed it.

During his roughly 50-minute address, Mitsotakis emphasized commonalities in U.S and Greek democratic history as well as the two countries’ shared current domestic and international challenges.

“Our democracies have struggled with internal demons,” he said to strong applause. “Both our countries endured the horrific pains of civil wars, the desperation of economic crisis. But we have emerged stronger and more committed to defend the values that our ancestors gave their lives for.”

Greece has traditionally had strong relations with Russia though ties between the two predominantly Christian Orthodox countries took a hit after Athens agreed to support modest European Union sanctions on Russia as punishment for Moscow’s 2014 military annexation of Ukraine’s Crimean Peninsula. After Russia’s full-scale February invasion of Ukraine, Mitsotakis’ decision to support Kyiv with weapons shipments was not popular with Greeks, who strongly favored a more neutral position, according to several opinion polls.

Despite the lack of Greek public enthusiasm for weapons deliveries, Mitsotakis told lawmakers Athens will continue to stand strongly by Ukraine. He received another standing ovation for that pledge.

“Mr. Putin is striving to create a world … in which armies, rather than diplomats, settle disputes,” he said. “He must not succeed, not only for the sake of Ukraine but also in order to send a message to all other authoritarian leaders that historical revisionism and open acts of aggression that violate international law will not be tolerated by the global community of democratic states.”

The Greek prime minister said the U.S. and Greece are entwined both by the inspiration America’s founding fathers drew from ancient Greek philosophers in their efforts to establish U.S. democracy and the example the American Revolution set for Greek revolutionaries in the early 19th century when they waged an eight-year war of independence from the Ottoman Empire.

He drew on that shared history in arguing Washington must maintain a robust global leadership role in dealing with the long-term challenges of climate change, rising authoritarianism, the spread of disinformation in democracies, and preparing for the next pandemic.

“The United States has a crucial role to play today in an even more complicated world,” Mitsotakis said to a standing ovation. “The world looks to the strongest and most prosperous democracy for leadership. You simply cannot afford to sit on the sidelines.”

Mitsotakis met with President Joe Biden on Monday, after which the White House held a reception to celebrate Greece’s independence bicentennial.