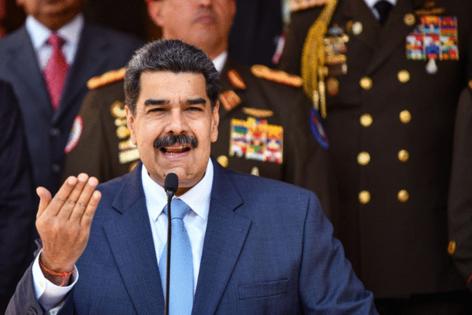 MIAMI — The Biden administration will ease sanctions on President Nicolás Maduro in Venezuela in exchange for a commitment from the government to dialogue in Mexico City with Venezuela’s opposition movement, sources familiar with the matter told McClatchy and the Miami Herald, marking a turning point in Washington’s pressure campaign on Caracas.

The new U.S. sanctions relief will allow Chevron, a major energy company, to begin talks over potential future oil production in Venezuela, and will remove Carlos Erik Malpica-Flores, a former high-ranking energy official in Venezuela and the nephew of Maduro’s wife, from a U.S. sanctions list.

Maduro walked away from talks with the Venezuelan opposition last fall, all but collapsing the fragile diplomatic effort. The country’s democratic leader, Juan Guaidó, whose movement has faltered over the past year, has rested his negotiating position on continued U.S. sanctions.

A senior administration official told McClatchy that the sanctions relief was coordinated with the opposition.

“It is very important to stress that this was done in coordination with the interim president, Juan Guaidó, to move the talks forward,” the official said. “This is something that they thought would be helpful for the talks to move forward.”

The United States and nearly 60 other nations recognize Guaidó as Venezuela’s interim president and accuse Maduro of leading the economic collapse of Venezuela over the past nine years. The Trump administration imposed severe sanctions on Caracas and even considered using force to overthrow Maduro in 2019.

“It’s a narrow license authorizing Chevron to negotiate the terms of their potential future activities in Venezuela — but this is all contingent on steps being taken that are positive by the Maduro regime,” the official said. “Further authorization would be needed for Chevron to get into any sort of agreement.”

President Joe Biden has continued Trump’s maximum pressure campaign since taking office. But Russia’s invasion of Ukraine in February created an opening for the administration to engage directly with Caracas. The White House hoped to splinter Venezuela’s alliance with Moscow and bring additional oil output into the marketplace as the war disrupted energy prices.

In early March, a White House official led a first U.S. delegation to meet with the Maduro government, primarily to negotiate the release of two American detainees. But at the time, officials acknowledged that energy was another topic of discussion at the meeting.

Further sanctions relief would be tied to progress at the talks in Mexico City, one official familiar with the matter said.

“We want to be very clear about this point,” the official added. “Sanctions on the Maduro regime will remain in place. We are not doing this to reverse Trump’s maximum pressure campaign. Our policy, overall, has not changed.”

News of sanctions relief comes just three weeks before the United States hosts the Summit of the Americas for the first time since the inaugural summit in 1994. Several leaders in the region are encouraging the administration to invite a representative from the Maduro government to participate.

Meanwhile, there are few indications that Caracas will turn away from Russia as it engages with the United States. Maduro announced on Monday that his ambassador to Moscow, Carlos Faría, would become Venezuela’s new foreign minister.

Earlier proposals to dismantle the U.S. sanctions were called “foolish” by opposition insiders that claim that it would only serve to strengthen Maduro’s political grip inside the South American country and dismantle the little leverage the opposition would have at the negotiation table in Mexico.

Both sides have held a number of peace talks throughout the years to try to solve the enduring political crisis in the country, but they all failed as the Caracas regime proved unwilling to yield concessions of substance, opting to use the process as a safety valve to gain time and dispel internal pressure.