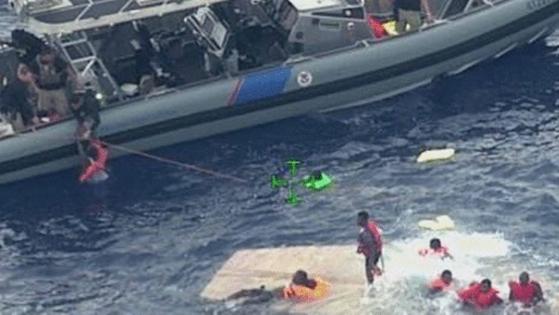 Thirty-eight survivors have been found so far. Nearly all are Haitian, but there were two Dominican nationals among those found in the water.

Eight Haitians were taken to a hospital in the northwestern town of Aguadilla and the bodies of the dead were sent to the Puerto Rico Forensic Sciences Institute.

María Conte Miller, the director of the institute, confirmed in a press release Friday morning that DNA samples will be taken to confirm their identities.

“We established communication with the Consulate of the Dominican Republic in Puerto Rico in an effort to locate the families of the deceased,” she said.

A U.S. Customs and Border Protection aircraft noticed the capsized vessel and over 20 people in the water near noon Thursday about 11 miles from Desecheo Island, a wildlife refuge in the Mona Passage, the stretch of water between Puerto Rico and the island of Hispaniola. Most of the passengers appeared to not be wearing life jackets.

The search continued 24 hours later, with Customs and Border Protection, the U.S. Coast Guard and the Puerto Rico Police Department working together. The Coast Guard also dispatched a plane and reinforcements from Clearwater, Florida. Customs is interviewing survivors to figure how many people were on the boat before it overturned.

Illegal voyages to Puerto Rico across the Mona Passage are often conducted on dangerous, overloaded makeshift vessels. A sudden shift in weight, dangerous weather and ocean conditions, a broken-down engine and other factors can quickly turn one of the journeys deadly.

Castrodad told the Herald that the capsized boat measures between 25 and 30 feet. While the exact number of people the boat was carrying before it capsized remains unclear, it was carrying at least 49 people between the already found survivors and the dead ⁠— an indication that the boat was overloaded.

“If we are searching it is because we understand that there are more people in the water,” said Castrodad.

The capsizing occurred days after a Haitian woman died on an illegal voyage in the Mona Passage on May 7. The Coast Guard and the Dominican navy rescued a group of 68 migrants after they spotted them emptying water out of the vessel. During the rescue, the boat capsized and authorities retrieved the unresponsive woman from the water but she could not be revived.

“This can happen with any of the voyages that come daily or try to cross the Mona Passage. The risk of capsize continues to occur and the danger is present in each of these trips,” said Castrodad.

Between Oct. 1 and March 31, the Coast Guard and its partner agencies had intercepted 1,308 undocumented immigrants in the Mona Passage and near Puerto Rico, according to agency data. Most of the people the Coast Guard came across were Dominican, 940, followed by 298 Haitians. The combined number of Dominicans and Haitians the Coast Guard has so far interdicted this year is 158% more than the previous fiscal year.