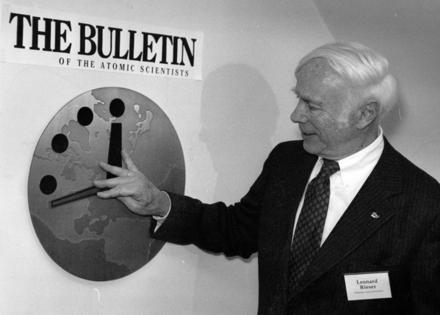 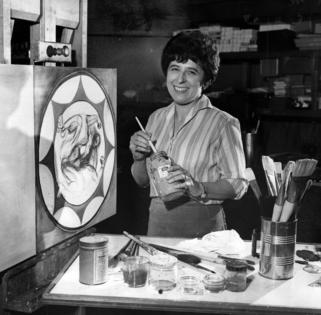 CHICAGO — Martyl Langsdorf designed just one magazine cover, but it has had considerable staying power. A prolific painter of abstract and figurative canvases, she was commissioned 75 years ago by the scientists who built the atomic bomb that ended World War II. By 1947 the Cold War was on, and they wanted to alert Americans to the danger of a nuclear confrontation with the Soviet Union.

They hoped to “frighten men into rationality,” said Eugene Rabinowitch, a biologist and the first editor of the Bulletin of the Atomic Scientists.

To express that objective visually, Langsdorf played with various images.

“The most significant of all was a sketch of a clock, which I made on the 8-by-11-inch back of a bound copy of Beethoven’s Piano Sonatas,” she recalled. “A clock in white paint on the black binding of the Sonatas.”

A clock symbolizes urgency — and her Doomsday Clock did so emphatically by being stripped down to the essentials. A quarter section of a circle with the hours marked by dots, its long hand set at seven minutes to midnight. Its name is a riff on the biblical prophecy of the day the world will end.

In 1949, Rabinowitch advanced the clock’s big hand to three minutes before midnight. The government was downplaying a nuclear explosion detected in the Soviet Union, but Rabinowitch said, “the distant rumbling of the first Soviet atomic bomb shows the world well advanced toward the abyss of an atomic war.”

From then on, the Association of Atomic Scientists has annually announced if the Doomsday Clock has moved toward or away from disaster. This year’s “reveal” will be on Jan. 20 on a real clock in the lobby of its offices on the University of Chicago’s campus.

Robert Rosner, who will make the Jan. 20 announcement, hasn’t seen “Don’t Look Up,” Hollywood’s riff on a doomsday scenario about a pair of young scientists vainly alerting the president to a meteor headed smack at the Earth.

“I’ve run into that attitude of politicians too often,” said Rosner, chairman of the committee that decides the long hand’s placement.

In a 2019 article in “Art & Object,” Charlotte Hecht wrote that the Doomsday Clock reflected the “crosscurrents of modernism, industry, and science that ran through the city at midcentury.” Modern European design had been transplanted to Chicago by the architect Mies van der Rohe, who proclaimed: “Less is more.”