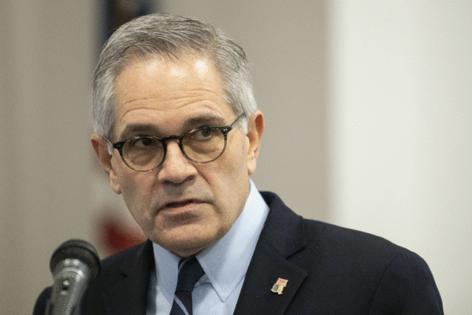 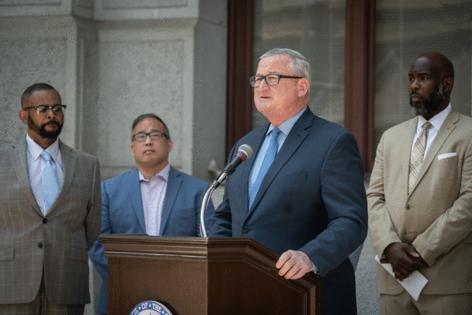 PHILADELPHIA — Two days after Philadelphia District Attorney Larry Krasner stirred outrage by insisting the city isn't in the midst of a crime or violence crisis, Mayor Jim Kenney and the city's police commissioner sought Wednesday to gingerly wade into — or away from — the issue.

During their scheduled biweekly news conference, one that began this year in direct response to the rising number of shootings, Kenney and Commissioner Danielle Outlaw both said they do believe the city has a gun violence problem.

Both also declined to say more about Krasner's comments or the ensuing pushback, including a blistering statement from Kenney's predecessor, former Mayor Michael Nutter, who called Krasner's remarks "some of the worst, most ignorant and most insulting comments I have ever heard spoken by an elected official."

Kenney on Wednesday said while he agrees "we're in a gun crisis," he would not "get involved in a back-and-forth between a former mayor and the DA."

Outlaw said, "We absolutely have an issue with violent crime." Asked whether comments like Krasner's are a hindrance to her officers' work to prevent and respond to violent crime, she was measured.

"Any type of commentary — regardless of who it's from — any type of commentary or actions that undermine our ability to be successful obviously is a hindrance," she said. "My hope is that moving forward we can all be aligned and working toward the same goals. ... We all have to have a shared understanding of the problem that we're addressing."

Krasner's remarks Monday came during the district attorney's weekly news conference, which is focused on gun crimes. In response to questions about whether tourists should fear coming into the city, Krasner pointed out that even as homicides and shootings have spiked in Philadelphia and across the country, other categories of crime have not.

Police figures show that in addition to a record 523 homicides — more than the previous record of 500 set in 1990 — aggravated assaults and robberies committed with guns have also risen since last year, while nonfatal shootings are about on par with 2020. Last year's rate was the highest since police started tallying shooting victims.

In addition to drawing the ire of the former mayor, Krasner's comments gained traction on social media Tuesday and found an audience on Fox News, which aired a segment on the brouhaha Wednesday morning. John McNesby, who as the leader of the city's police union has been one of Krasner's loudest critics, said the district attorney was deflecting responsibility.

"He blames everybody but his own self," McNesby told Fox News. "I'm glad that people are starting to wake up and starting to call him out."