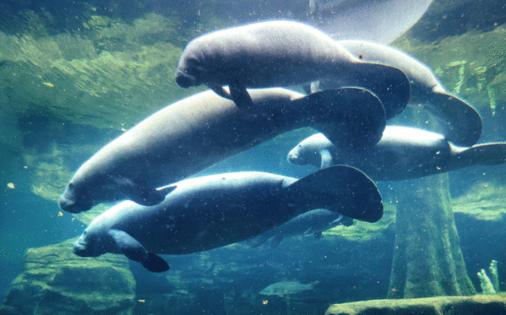 A total of 757 manatees died, most from starvation, over the past year around the Indian River Lagoon, where pollution from farms and lawns has killed off seagrass. The deaths pushed the number of manatee deaths statewide past 1,000 for the year.

“There are all sorts of unintended consequences of that that usually lead to poor outcomes for manatees. So we’ve collectively looked at that and decided that this unprecedented event was worth unprecedented action, and we are prepared to do that.”

Wildlife advocates applauded the move, although they called it a stopgap measure that doesn’t address the water pollution problems that have turned part of Florida’s Atlantic coast into a deadly place for manatees. Fertilizers from farms, lawns and septic tanks have fertilized algae blooms that shaded out seagrass, destroying thousands of acres of grazing areas for manatees in a process worsened by climate change.

“While this program is a much-needed reprieve for manatees, it is a short-term, emergency measure made necessary by a long-term, systemic problem,” said Elizabeth Fleming, senior Florida representative at Defenders of Wildlife. “Until Florida’s leaders tackle the pollution that’s decimating these seagrasses, manatees will continue to suffer.”

It’s unclear whether the emergency feeding will actually take place. State and federal officials said they’ve set up a system to do it so they can move fast if it’s needed.

The majority of last year’s deaths took place in the winter, when manatees clustered around the warm discharge zones of a Florida Power & Light plant in Cape Canaveral and ate all the nearby food. Authorities hope the mild winter that’s prevailed so far continues, allowing manatees to roam in search of food and preventing the need to feed them.

“What happened last year caught us off guard, so we’ve been preparing so this year we can get our response ramped up and we can go into action,” Eason said.

The amounts of food involved in feeding them could be enormous. An average manatee could eat 50 to 100 pounds of food a day.

The Atlantic population of manatees, where the deaths occurred, is one of four main populations in the state. The other three have not experienced a wave of mortality. The state’s total manatee population has been estimated at nearly 9,000.

The federal conservation status of manatees was changed from endangered to threatened in 2017 under the Trump administration, in a move supported by the boating industry and opposed by many environmentalists. They retain protection under the Endangered Species Act, despite the change in status.

The state wildlife service and U.S. Fish and Wildlife Service have set up a unified command with a field response station at the FPL Cape Canaveral plant to coordinate rescue, feeding and health assessments.

“We understand the importance of a timely response. Our agencies and unified command partners carefully considered all aspects of a short-term feeding trial,” Shannon Estenoz, Department of the Interior Assistant Secretary for Fish and Wildlife and Parks, said in a statement. “It is critical we help manatees in the short term with actions that are compatible with their long-term well-being and resilience.”

FPL, whose power plants produce warm water discharges that are crucial to manatee survival, announced it would donate $700,000 to rescue efforts, including rescue transport truck in partnership with the Fish & Wildlife Foundation of Florida.

FORT WORTH, Texas — The hostage standoff inside a Colleyville synagogue Saturday reignited fears of antisemitic violence with news headlines that circled the globe. But for many Jewish Americans, the threat of such an ...Read More

Iran-backed Yemeni fighters said they launched drone strikes on the United Arab Emirates that caused explosions and a fire on the outskirts of the capital Abu Dhabi and left three people dead, ratcheting up tensions in the...Read More

Dr. Anthony Fauci, the top medical adviser to the U.S. president, said it’s too soon to say whether the omicron variant will herald a shift in the COVID-19 pandemic to endemic.

“It’s an open question as to whether ...Read More