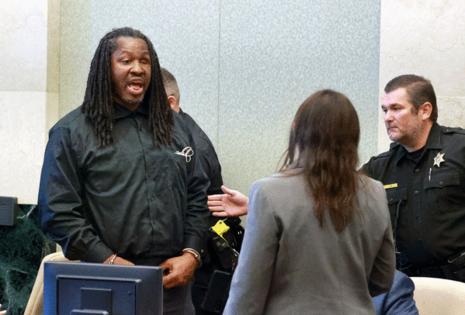 The 12-member jury deliberated for about five hours over two days on whether Loyd should face capital punishment for Clayton’s 2017 killing.

The same jury convicted Loyd of first-degree murder last month for fatally shooting Clayton when she tried to arrest him at the Walmart on Princeton Street Jan. 9, 2017, for killing his pregnant ex-girlfriend, Sade Dixon, in December 2016.

Before they began deliberating Tuesday, jurors heard closing arguments from both sides.

Prosecutors argued Loyd had lived his life blaming others for his criminal actions in at least 10 violent felonies, including both the Clayton and Dixon killings.

“What you’ve heard from Mr. Loyd is that nothing is ever his fault,” Assistant State Attorney Ryan Williams said. “… It is Markeith Loyd’s choices that brought all of us here today, and we ask that for the first time you hold him responsible for his choices and vote to recommend a sentence of death in this case.”

Loyd’s defense attorney, Terence Lenamon, argued jurors should consider the mitigating circumstances in Loyd’s life, including being diagnosed with post-traumatic stress disorder, psychosis and a delusional disorder. Loyd takes a “kernel of truth” and turns it into a full-blown delusion, including his belief that police were trying to kill him, Lenamon said in his closing argument.

This is the second time Loyd faces a possible death sentence.

He was convicted of first-degree murder in 2019 for killing Dixon but avoided the death penalty after jurors recommended he be sentenced to life in prison without parole.