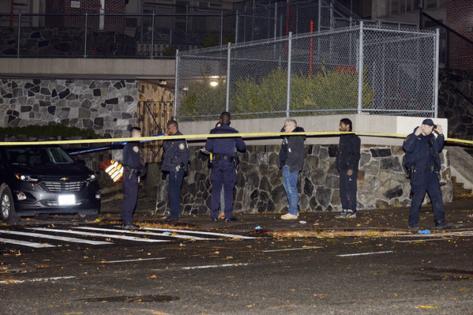 NEW YORK — A gang member fatally stabbed a Columbia University teaching assistant during a random late-night Manhattan crime spree in which he also plunged a knife into a second man and terrorized a couple walking in Central Park, authorities said Friday.

Vincent Pinkney, on parole for a gang assault conviction and the owner of a long rap sheet, cried out in joy after the second Thursday night stabbing of a man walking along Columbus Avenue near West 110th Street, a witness told the Daily News.

Police sources indicated the attacker, arrested in the Manhattan park after the last attack, belonged to the Queens-based EBK gang, an acronym for “Everybody Killas.”

“He was ecstatic,” said a Columbia student who witnessed the second unprovoked attack shortly after the suspect fatally stabbed Davide Giri, 30, in the stomach. The victim was targeted as he walked home from a late-night soccer practice in a park in Harlem.

Stunned eyewitnesses called 911 after the bleeding Giri, targeted for no apparent reason, stumbled out of the park at 11:09 pm., police said.

The victim, who had come to the university from Italy, was pursuing his Ph.D. in computer science at the school, where he also served as a teaching assistant and a project mentor after arriving as a graduate research assistant in January 2016, according to his online bio.

“The worst part is the family,” said a distraught woman outside Giri’s address. “And they’re going to say the problem was the city. At 11 p.m., you should be able to come back from soccer practice.”

His teammates at NY International FC remembered Giri as “a pillar of the club ... A lion never dies, he sleeps.”

The assailant, after the killing, headed south through Morningside Park in search of more targets, police said.

When the suspect reached West 110th Street and Columbus Avenue, near a pizzeria, he ran up behind second victim Robert Malastina, 27, before plunging the knife into the man’s back and then his chest.