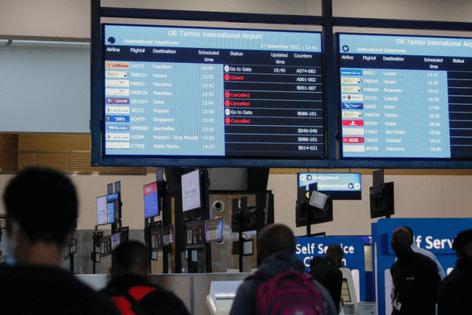 The caseload marks a disturbing 35% increase in the past day alone and an eye-popping 163% jump since Tuesday.

The country’s positive test rate leaped to 22.5%, a figure that has also more than doubled this week alone according to South Africa’s National Institute for Communicable Diseases.

Since South African doctors first identified omicron last week, cases have spiraled more than 10-fold. Most of the new COVID cases are the omicron variant, quickly displacing the delta variant currently dominant in the U.S. and worldwide.

The majority of the cases in South Africa are in and around the capitol of Pretoria, which is near the sprawling economic powerhouse of Johannesburg.

The omicron-fueled spread has so far barely reached other big cities like Cape Town and Durban, meaning numbers will likely continue to rise quickly in coming days.

Johannesburg is linked by daily nonstop flights to the U.S.

South Africans and any other foreigners who have recently been in the southern African region are now banned from the U.S., citizens and green card holders are still free to travel back and forth as long as they are fully vaccinated and have a negative COVID test.

The limits of those restrictions are proven by the first U.S. case of omicron, which came in a traveler who arrived from South Africa on Nov. 22.

The second case identified in the U.S. is of a Minneapolis man who recently attended a convention at the Javits Center in New York. He had not traveled to southern Africa, raising the likelihood of community spread in New York City.