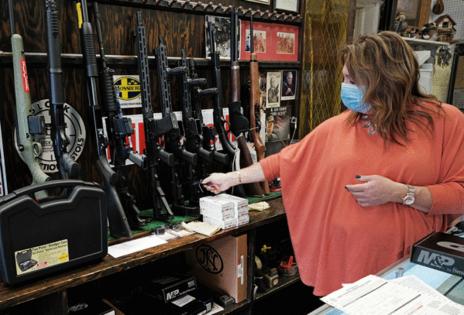 A rule of thumb in the firearm industry is that when Democrats are in office, gun owners buy more guns because they're worried that politicians will "take their guns away."

But as with so much else in 2020, the last year of President Trump's tenure, that rule did not seem to apply.

The total number of guns purchased each year in the U.S. is hard to come by. But the number of FBI background checks, which represents a substantial portion of efforts to acquire firearms, reached a record 39.7 million in 2020 — a 40% jump from the year before. The surge began during the early months of COVID-19, and it picked up steam in the summer following the murder of George Floyd and its consequences.

In a new study exploring the psychology behind these purchases, Rutgers University researchers found that when compared to other gun owners, those who purchased firearms in 2020 seemed more sensitive to perceived threats and had less control over their emotions and impulses.

"What we're showing is that these people who are purchasing firearms during the 2020 surge are different from typical firearm owners," said Taylor R. Rodriguez, one of the study authors. "There's something unique about this group of people."

The findings come amid a renewed debate over gun safety, sparked by record rates of homicides in Philadelphia and other cities in 2021, the Kyle Rittenhouse trial, and other high-profile cases.

Published in the journal Social Science & Medicine, the study was based on a survey of 3,500 U.S. adults, selected to correspond with demographic characteristics from the 2010 Census. Participants included gun owners who said they purchased a firearm in 2020, those who did not, and non-gun owners.

When asked a series of questions designed to measure sensitivity to threats, gun owners who did not purchase a new firearm in 2020 scored the lowest of the three groups. Those who did purchase firearms in 2020 were more wary of threats, scoring about the same as non-gun owners.

In a second series of questions designed to measure "disinhibition," those who purchased a firearm in 2020 scored far higher than either of the other two groups, meaning they had lower impulse control.

The mindset that prompts people to purchase firearms has received little study, so the new findings represent a valuable contribution to the field, said Nick Buttrick, a postdoctoral research associate at Princeton University's School of Public and International Affairs.