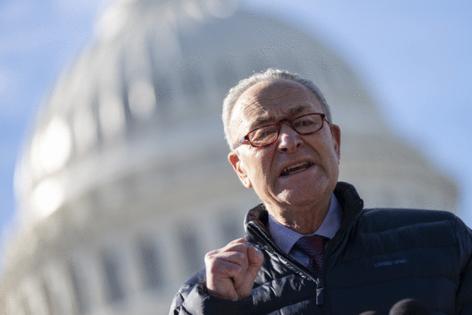 Once again, the annual defense policy bill has stalled in the Senate, leading to another round of recriminations over which party is to blame.

Majority Leader Charles E. Schumer, D-N.Y., took to the Senate floor Tuesday to criticize Republicans for holding up the bill, saying the deal offered by Democrats to vote on 19 amendments “is more than fair and reasonable” and had the approval of the Armed Services Committee’s top Republican, James M. Inhofe of Oklahoma.

Nonetheless, Inhofe joined most of his Republican colleagues in voting against cloture on Monday, although he supports the bill itself.

Schumer said the deal between Inhofe and Armed Services Chairman Jack Reed, D-R.I., allowed for more amendment votes than in the previous four years combined. “To say that we’re being unfair, to say that we’re not giving enough amendments is poppycock, and they know it,” Schumer said.

“The Democratic leader wants to block the Senate from fully and robustly debating a number of important issues, from how to manage the fallout from the reckless Afghanistan retreat” to how to respond to China’s destabilizing military modernization, McConnell said.

A procedural vote to end debate on the fiscal 2022 National Defense Authorization Act fell short Monday evening by a tally of 45-51, with 60 yea votes needed to move forward.

Susan Collins of Maine was the only Republican to vote for cloture, while four progressive Democrats, Edward J. Markey and Elizabeth Warren of Massachusetts and Jeff Merkley and Ron Wyden of Oregon, along with Vermont independent Bernie Sanders, voted with the other Republicans against cloture. They oppose the bill’s increase in the defense topline.

Though the GOP’s opposition has contributed to a year-end crunch for Democrats, who are trying to enact fiscal 2022 appropriations, raise the debt ceiling and pass a broad social welfare and climate bill, McConnell insisted that Republicans had acted only to secure more amendment votes. “That is the only reason that we pushed the pause button on this bill,” he said at an afternoon news conference.

Republicans want to vote on an amendment, sponsored by Republicans Jim Risch of Idaho and Ted Cruz of Texas, who both are members of the Foreign Relations Committee, which would sanction allies of Russian President Vladimir Putin over the proposed Nord Stream 2 pipeline connecting Russia and Germany. But given that the Biden administration waived sanctions over the issue, Democrats are looking to avoid a vote that could potentially put them at odds with the White House.