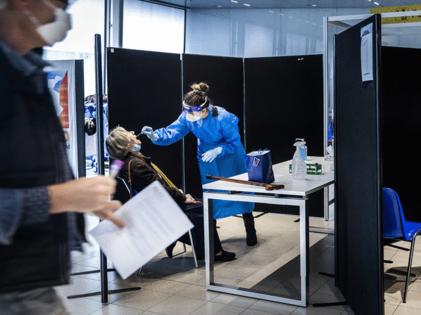 PARIS — Since the start of the coronavirus pandemic nearly two years ago, Europe has notched up plenty of unhappy distinctions.

The continent saw the world’s first massive wave of COVID-19 fatalities in the early months of the outbreak. The European Union, although made up of some of the world’s most advanced democracies, got off to a slow start on vaccine rollouts earlier this year.

And a hard core of vaccine resistance, often tied to far-right populism, helped set the stage for a virulent fourth wave of infections now raging across Europe, triggering stringent lockdowns whose like hadn’t been seen for months.

Now comes omicron, and Europe once again finds itself in the coronavirus crosshairs.

Greece is making vaccines mandatory for over-60s. A woman who fled a Dutch quarantine hotel was arrested as she and her partner tried to hop a flight to Spain. A man pinpointed as having Italy’s first known case of omicron had infected five family members by the time his illness was detected.

As the variant hopscotches the globe, disproportionate numbers of European countries — more than a dozen in all, from Sweden and Denmark in the north to Spain and Italy in the south — have acknowledged finding omicron within their borders. Those countries with reported cases include Europe’s biggest economies: Germany, Britain and France.

And it turns out omicron isn’t exactly a newcomer. The Netherlands said Tuesday that it had confirmed the presence of the variant in Dutch test samples taken as early as Nov. 19 — well before South Africa first announced its detection on Thanksgiving Day. Experts believe it is already in wide circulation internationally.

All this has contributed to an enveloping sense of gloom and frustration across the continent as financial markets shudder, politicians ponder unpopular restrictive measures, and hopes for a robust return of festive year-end holiday celebrations are dashed.

In a babel of tongues, ordinary Europeans vented their pandemic fatigue.

“We seem to have gone back two years,” said Benoit Dalenne, a 45-year-old Frenchman who lives near the northern city of Lille. “We are feeling blue — as though everything we have done was not of much use.”