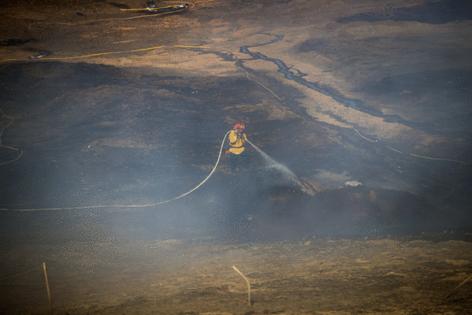 A red flag warning went into effect at 10 a.m. Wednesday for much of Los Angeles and Ventura counties. It will last through 6 p.m. Friday, as gusty northeast winds and bone-dry air bring the potential for critical fire weather in the region, according to the National Weather Service.

On Thursday afternoon, authorities in San Diego County issued an evacuation warning for some residents in the City of Santee as firefighters battled a brush fire. John W. Minto, mayor of Santee, said it appeared the Magnolia fire scorched 18 acres but the forward progression was stopped and structures were no longer in peril.

A small brush fire in Sylmar that broke out near Lopez Canyon Landfill was quickly knocked down.

Temperatures in coastal and valley areas are expected to hover in the mid-70s through Thanksgiving before warming slightly on Friday and into the weekend, said Ryan Kittell, a meteorologist with the weather service's Oxnard station.

Beaches might see the warm temperatures on Thursday, he said. "That's usually the case with Santa Anas," Kittell said, explaining that the air warms as it drops in elevation.

Southern California Edison said customers could be affected by public safety power shutoffs to reduce the danger of fire from utility lines knocked down by winds.

As of Thursday morning, power was shut off to nearly 64,000 Edison customers. Another 156,000 customers also could face shutoffs.

(The San Diego Union-Tribune contributed to this report.)

TACOMA, Wash. — The search for the shooter who terrorized Tacoma Mall shoppers Friday night entered its second day Saturday as a victim recovered in a local hospital.

DAYTON, Ohio — The city of Dayton has received approval to tear down a property that was briefly home to the Wright Brothers’ first bike shop, then was used by the Gem City Ice Cream Co. for decades.

SAO PAULO, Brazil — The governor of Brazil’s richest and most populous state was picked by the Brazilian Social Democracy Party as its candidate for next year’s election challenging President Jair Bolsonaro.