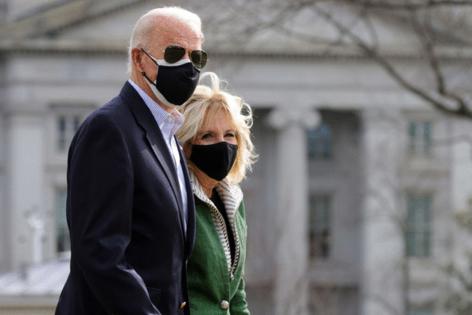 WASHINGTON — Last weekend, before his second trip abroad since taking office, President Joe Biden had to prepare for foreign leader meetings and wanted to do it from the comfort of his family home. But he had problems brewing in Washington, where his legislative priorities are struggling for passage.

Instead of staying at the White House, where he usually meets with lawmakers, Biden summoned two Democratic senators to his house in Wilmington, Delaware, in an effort to get his domestic agenda moving through Congress.

Biden’s routine trips to his personal residence underscore the difficulty he has had adjusting to life in the executive mansion, where he has little privacy and has acknowledged feeling not quite at home. He has traveled to Delaware 25 times since taking office in January, all but two of the trips were to spend time at home.

White House press secretary Jen Psaki said that as a former Delaware senator, Biden has “deep roots and he feels a deep connection with the community” in the state he represented for more than three decades.

“That’s also where he sees family, many of whom live around there, and that’s always something that’s centering and good for anybody who is in a job like of course being President of the United States,” Psaki added.

Rarely alone and under constant security as president, Biden has indicated he feels unsettled in the White House. He has lamented that he no longer feels at ease getting himself breakfast or walking about his living quarters in a bathrobe.

He often spends weekends at his personal residence in Wilmington and out of the public eye, except for going to church, and in warmer weather, dining or playing golf.

Biden’s breakfast meeting last weekend with Senate Majority Leader Chuck Schumer of New York and Sen. Joe Manchin of West Virginia was unique. Psaki tied it to the president’s desire to be in Delaware before spending extended time away on an overseas trip.

Manchin said that Biden was “much more comfortable” in that setting. “You’re always comfortable at home,” he added.

Biden commuted to work in Washington for 36 years as a senator on the train and was often able to make it home to Wilmington in time for family supper.