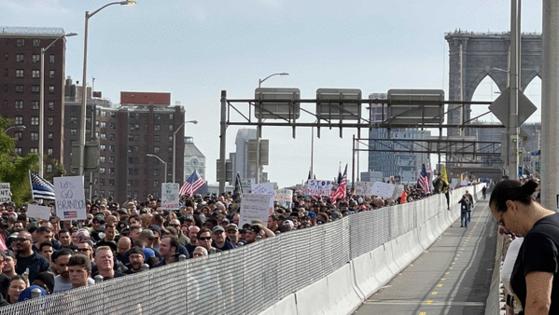 The Police Benevolent Association had argued that the NYPD’s “vax or test” program, which requires unvaccinated officers to get tested weekly, was sufficient to protect against the spread COVID-19. The mandate, the union representing rank and file cops argued, violated officers’ bodily autonomy.

City workers who fail to get vaccinated before Friday’s deadline will be placed on unpaid leave and could be terminated.

“Today’s ruling sets the city up for a real crisis. The haphazard rollout of this mandate has created chaos in the NYPD,” PBA President Patrick Lynch said in a statement.

As of Tuesday, 73% of the NYPD’s work force has received at least one dose of the COVID vaccine, NYPD Commissioner Dermot Shea said.

The union filed the lawsuit on Republican-friendly Staten Island, but the case was assigned at random to Colon, a Democrat elected to her position in Brooklyn.

The lawsuit bounced around state and federal court for several days before Colon made her ruling. After the suit was filed, the city successfully had it transferred to Brooklyn Federal Court. The PBA then cut elements of the lawsuit that applied to federal law and re-filed it on Staten Island — only to draw Colon at random for a second time, sources familiar with the case said.

Colon has previously ruled against challenges to vaccine mandates. In September, she declined to block the city’s bar and restaurant vaccine mandate in a suit brought by Mac’s Public House, which made headlines last year for flouting COVID-19 restrictions and clashing with the city Sheriff’s Department.