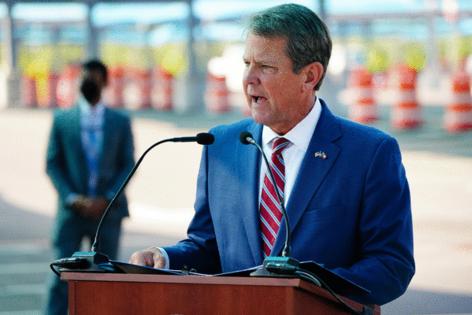 Gov. Brian Kemp and Attorney General Chris Carr are set to file the lawsuit by Friday, according to two people with direct knowledge of the litigation who requested anonymity to discuss confidential proceedings.

Kemp had warned that he would “pursue every legal option available to the state of Georgia to stop this blatantly unlawful overreach by the Biden administration” shortly after the president announced a range of new vaccine requirements that could affect as many as 100 million Americans.

The new rules mandate that businesses with more than 100 workers require their staffers be vaccinated or tested regularly for COVID-19. An additional 17 million workers at health care facilities that receive federal medical funding would have to be vaccinated.

The state’s litigation would target a separate executive order that requires that federal executive branch employees and contractors be vaccinated. That could affect thousands of Georgians who are vendors of the federal government or work for certain public agencies, such as the higher education system.

Kemp, who faces reelection next year, has joined other Republican leaders in the Deep South in opposing vaccine requirements and mask mandates. Instead, he has regularly encouraged Georgians to consult with their medical providers and get the vaccine.

The governor has recently taken steps to boost the ranks of state-financed health care staffers and offer incentives to state employees who have been vaccinated. But despite pressure from public health experts to impose new restrictions, he’s warned that more aggressive action would backfire.

“You can lead a horse to water, but you can’t make them drink. I mean, that is not the government’s role,” Kemp said recently. “Our role is to educate people and to tell them the truth.”

Meanwhile, Kemp has also refused calls from some conservatives to block local school systems from requiring masks and businesses from instituting vaccine mandates, saying he believes in local control and that he is not “going to tell private companies what to do.”

Though Georgia recently reached a milestone, with roughly 50% of the state’s residents fully vaccinated against the disease, it still lags behind much of the nation with its inoculation rate.