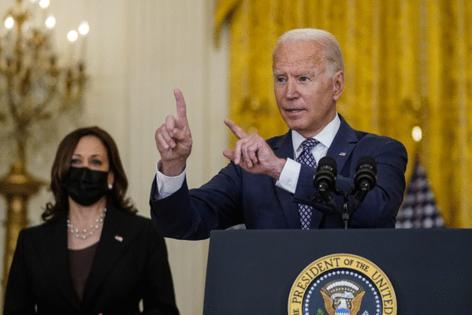 In their first two months in the White House, President Joe Biden and Vice President Kamala Harris were practically inseparable — Harris traveled with Biden to the Pentagon, sat in the Roosevelt Room when he met virtually with a foreign leader and delivered her own remarks on the administration’s priorities.

The proximity fueled a sense that she would be part of an unusual partnership, “the Biden-Harris administration,” as it was branded.

But nine months in, Harris’ schedule reflects the life of a more conventional vice president, one who sees the president less often and spends more time selling the administration’s agenda in roundtables and day trips to reservoirs and classrooms, according to an analysis of her public events by the Los Angeles Times.

Only about a fifth of the activities listed on Harris’ public calendar in September and October have involved Biden, compared with roughly three-quarters of them in January and February. This month, Harris has had seven activities with Biden on her public schedule, six of them behind closed doors. At least some of that shift is the result of a decline in COVID-19 restrictions, which kept the leaders closer to Washington in the early months.

The lone public event this month with Biden came Thursday, when Harris delivered remarks to celebrate the 10th anniversary of the Martin Luther King Jr. Memorial on Washington’s National Mall.

In the prior two months, Harris attended one public event with Biden, a wreath-laying ceremony at the Pentagon on Sept. 11. Harris and Biden traveled at separate times that day to commemorate the flight that crash-landed in Shanksville, Pennsylvania, even as both paid their respects.

Harris came into her position with unique expectations as a groundbreaking politician serving the oldest president in history and one who had himself served as President Barack Obama’s No. 2. Biden in the 2020 campaign told donors he was a “transitional candidate” who was seeking “to get more people on the bench that are ready to go in.” The implication, to some, was that Harris would be groomed in the event the 78-year-old Biden either could not fulfill his term or declined to run for reelection in 2024.

However, White House officials and Harris’ allies say it’s misleading to read too much into the scheduling shift, or to even call it that. They point out that schedules ebb and flow — Harris and Biden were together more often in July and August, a period that included public remarks after the Senate passed an infrastructure bill and a series of private briefings during the chaotic withdrawal from Afghanistan. Early in the administration, the officials say, the pair also spent time with each other out of necessity as the nation grappled with a pandemic that severely restricted travel and the size of public events.

The needs have now changed. With more people vaccinated and its legislative programs in jeopardy, the White House has launched an all-out effort to pass its agenda. That means Harris and Biden are frequently speaking to different groups, sometimes in different states, on the same day.

“I don’t really think there’s a whole lot of space between them,” said Bakari Sellers, a co-chair of Harris’ presidential campaign and a CNN political commentator who has remained a close ally. “She’s just being rolled out more.”