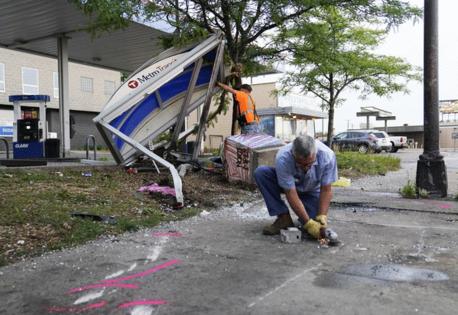 MINNEAPOLIS — A Minneapolis police officer was driving nearly 80 mph on residential streets when he struck Leneal Frazier's SUV this summer while pursuing a suspected stolen vehicle, resulting in Frazier's death, according to criminal charges filed Friday.

The Hennepin County Attorney's Office charged officer Brian Cummings with second-degree manslaughter and criminal vehicular homicide for striking the vehicle Frazier was driving on July 6 and killing him, a rare set of charges to be filed against a police officer in Minnesota.

Cummings, 37, of Minneapolis, was booked into the Hennepin County jail shortly before noon Friday and released about 90 minutes later. No bail was required and he was charged via summons, meaning he was allowed to turn himself in to be booked and released.

County Attorney Mike Freeman said his office charged both counts "to make sure that everyone knows how serious we think this is, because the conduct was so egregious. I want to make sure there's a guilty verdict here."

Freeman said he didn't know whether his office had ever previously charged an officer for their role in a pursuit.

Cummings' attorney, Thomas Plunkett, issued a written statement extending condolences to Frazier's family and stating that he would raise a "vigorous defense." He noted the stolen car had been taken in a "violent carjacking" and that it was linked to a "crime spree" that included at least four "violent criminal acts that same night."

"At this point in the case we still face many questions about the details," Plunkett said. Cummings has "fully cooperated" with the investigation, he said.

Attorneys for Frazier's family, Ben Crump and Jeff Storms, said in a statement that the family is "grateful" for the charges in what they called "the reckless killing."

"We commend the Hennepin County Attorney's Office for having the courage to hold law enforcement accountable in this instance," they said. "No innocent civilian should ever lose their life because of unwarranted high-speed chases in residential neighborhoods."

They added: "High-speed pursuit policies in Minneapolis and across America must be better written and stringently enforced to protect innocent civilians. This is only the first step in getting full justice for the Frazier family in this tragic and preventable loss."