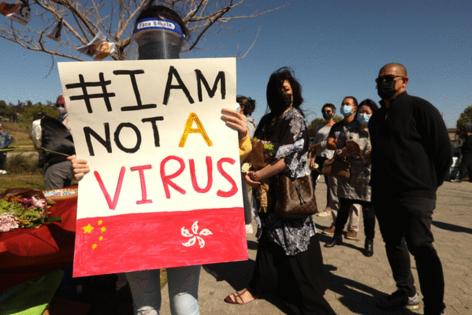 LOS ANGELES — Anti-Asian hate crimes increased by 76% in Los Angeles County last year, mirroring a disturbing trend in many other jurisdictions as physical and verbal attacks on Asian Americans rose during the COVID-19 pandemic.

Of the 44 anti-Asian hate crimes reported in L.A. County in 2020, more than three-quarters involved physical violence — a marked increase from 58% in 2018, the L.A. County Commission on Human Relations said in a report released Wednesday.

The data in the report were compiled from the L.A. County Sheriff's Department and more than 40 city police departments, including Los Angeles', as well as several school police agencies and community organizations.

The number of reported hate crimes is generally seen as unreliable because victims can be reluctant to report them.

However, sudden upticks are significant, and officials should work to understand the root causes, experts say.

Many point to then-President Trump's racially charged rhetoric, highlighting the coronavirus' Chinese origins, as a trigger for some anti-Asian attacks.

"It did not help that the former president repeatedly referred to COVID-19 as 'chinavirus' and 'kung-flu,'" Human Relations Commission President Guadalupe Montaño said in a statement.

In 10 of the 44 L.A. County anti-Asian crimes, the suspect explicitly blamed the victims for COVID-19, the report said.

In one hate crime cited in the report, a Chinese man was waiting at a bus stop when a white woman started yelling, "Go back where you came from, you f—ing Chinese!" before crossing the street and punching the man three times in the face.

NEW YORK — A gang member fatally stabbed a Columbia University teaching assistant during a random late-night Manhattan crime spree in which he also plunged a knife into a second man and terrorized a couple walking in ...Read More

While unveiling a 2022 budget wish list for the state’s ...Read More