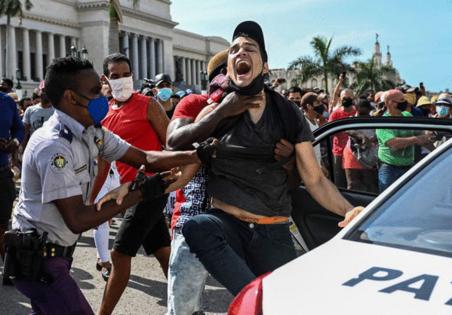 WASHINGTON — One of Cuba's most senior diplomats switches from Spanish to English when he describes the pace at which many Cubans expected a new President Joe Biden to ease restrictions on the island nation.

"Swiftly," Carlos Fernández de Cossío said. Biden had campaigned with the vow of a fast rollback of many of the toughest policies imposed on Cuba by President Donald Trump. But nearly nine months into the Biden administration, little has changed.

To punish Cuba and win political points in Florida, Trump took steps to reverse the diplomatic thaw started by President Barack Obama. Trump suspended remittances, the money Cuban Americans and others send to relatives and friends on the island; made drastic cuts in travel by U.S. citizens to Cuba; blocked some oil shipments to the country; and, on one of the last days of his administration, placed Cuba on the very short list of countries that sponsor terrorism.

Far from lifting the sanctions, however, the Biden administration tightened them in July after Cuban authorities' violent crackdown on rare anti-government demonstrations and the arrest of hundreds.

Despite promises early in Biden's presidency that limits on remittances — long a key source of income for many Cubans — would be eased, the State Department now says only that it has studied the issue and has sent recommendations to the White House.

A senior State Department official in an interview declined to detail the recommendations but said the goal was to get remittances to ordinary people and not into the hands of the Cuban government or military. At the National Security Council, the official in charge of Latin America, Juan Gonzalez, declined through a spokeswoman to speak to The Times. People familiar with the State Department review said the recommendations include solid ideas, such as the use of electronic wallets, that would satisfy the stated goals.

But some observers suspect the administration remains internally at odds over what to do about remittances and broader Cuba policy.

"There is no excuse for the Biden administration not to have done something on remittances," said Ted Henken, a professor of Latin American studies at Baruch College who has written extensively on U.S. policy regarding Cuba. "They are more afraid of acting and making a mistake than acting."

By easing sanctions, Biden could face political fallout among conservative Cuban Americans who make up a large voting bloc in the battleground state of Florida, as well as from lawmakers like Sen. Marco Rubio, R-Fla., and Sen. Robert Menendez, D-N.J., chair of the Senate Foreign Relations Committee.

Cubans, from government officials to ordinary citizens, are frustrated. Remittances are a lifeline for many families. U.S. officials argue that part of the remittance money is skimmed off by the Cuban government, a concern Havana says is overblown.