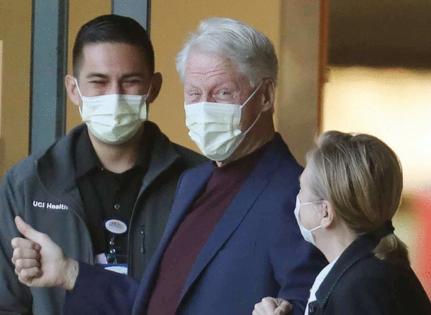 The 75-year-old is flying to New York with his wife, former Secretary of State Hillary Clinton, and his daughter, Chelsea, according to an aide. Upon landing, Clinton will head to their family home in Chappaqua, about 30 miles north of New York City.

“His fever and white blood cell count are normalized and he will return home to New York to finish his course of antibiotics,” said Dr. Alpesh N. Amin, who lead the team of doctors who treated Clinton. “On behalf of everyone at UC Irvine Medical Center, we were honored to have treated him and will continue to monitor his progress.”

Clinton walked out of the hospital with his wife shortly after 8 a.m., shook hands with Amin and flashed a thumbs-up at photographers gathered there.

The former president has been a globetrotting celebrity and philanthropist since leaving the White House in 2001, raising millions for his family’s nonprofit Clinton Foundation and getting paid handsomely to speak.

Clinton was in Southern California last week — his first trip to the West Coast since the pandemic — to speak at a foundation reception and dinner on Thursday. Hillary Clinton flew to California on Thursday to take his place at the event and to be with him at the hospital. Chelsea Clinton showed up at the medical center Saturday. The family spent time together catching up, and the former president also spoke with friends and watched college football.

On Tuesday, while visiting longtime friends in Orange County, the former president felt fatigued and was admitted to the intensive care unit at UC Irvine Medical Center that evening.

Clinton was diagnosed with a urological infection that turned into a blood infection, aides said. Though some media outlets said Clinton had sepsis — a life-threatening response by the body to an infection that can result in tissue damage and organ failure — aides said the former president was never in septic shock, the most severe and deadly stage of sepsis.

He was cared for in the intensive care unit because of concerns about COVID-19, an aide added.

Clinton was recovering well and was kept in the hospital over the weekend for continued intravenous treatment, said spokesman Angel Ureña.