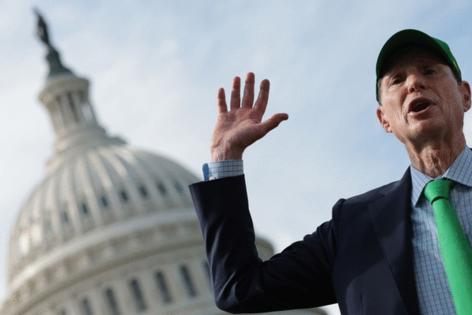 WASHINGTON — As they work to raise taxes on U.S. companies doing business abroad, Democrats are considering honing some details to align with a landmark deal for other countries to charge similar levies and curb tax avoidance in the process.

House Democrats drafted their international tax plan with an eye on the global talks when they made it part of their budget reconciliation bill, a filibuster-proof package intended to implement much of President Joe Biden’s domestic agenda.

Now with the bill stalled as Democrats debate spending levels, details of the global deal are solidifying and influencing discussions on exactly how the U.S. will boost taxes on multinationals — if they can get the plan past business-friendly centrists.

For starters, Democrats are discussing delaying tax increases to give time for other countries to set up their own minimum taxes on large multinationals’ earnings around the world. Late last week, 136 jurisdictions agreed to a 15 percent global minimum rate, a basic outline for rules and a timeline for implementation that wouldn’t see other countries’ new taxing regimes begin until at least 2023.

“Rather than competing on our ability to offer low corporate rates, America will now compete on the skills of our workers and our capacity to innovate, which is a race we can win,” Treasury Secretary Janet L. Yellen said in a statement following the announcement.

International officials are now working to unveil more detailed rules in November, when world leaders are set to meet to bless the deal. Meanwhile, Democrats in Congress are aiming for movement on the budget package by the end of October. That’s giving space for clarity on how the world will move toward the minimum tax, joining the U.S., the only country that currently has one.

A higher U.S. minimum tax rate than what the Organization for Economic Cooperation and Development-led deal contemplates and some related provisions would take effect next year under the current reconciliation bill. Democrats could push it back another year or more to align with when other nations are expected to begin charging the taxes, with some pieces beginning in 2023 and 2024.

Delaying the effective dates would cost some revenue, which Democrats need to cover spending in the budget bill they’ve pledged will be fully paid for. Still, the price tag is shrinking due to moderates’ demands, and tax increases are expected to be shaved down accordingly.

The House Ways and Means Committee plan has several components that would begin next year.

Currently, companies pay a 10.5 percent base rate on “global intangible low-tax income,” known as GILTI, from mobile assets held overseas such as patents and trademarks. That rate effectively ranges as high as 13.125 percent as companies lose some of the discount they get on taxes paid to foreign countries.