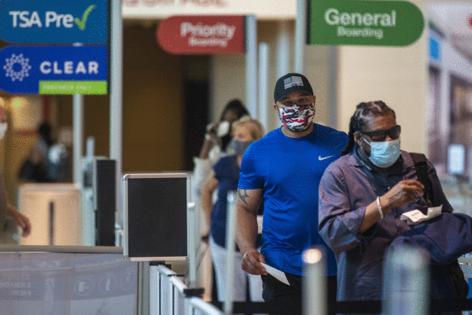 The Transportation Security Administration is sounding the alarm on the “huge problem” of a record high number of passengers bringing firearms to airports.

“We’ve had many more incidences where there are passenger disturbances both in checkpoints and onboard aircraft. That makes it more important that there are no guns involved,” TSA Administrator David Pekoske said.

TSA officials are already working harder than usual to avoid passenger confrontation as there has also been a sharp rise in the number of belligerent passengers on U.S. aircrafts.

In the first 10 months of the year, the TSA retrieved 4,650 firearms at security checks. The agency added that most of the recovered weapons were loaded, 3,900 of them or 80%, to be exact.

The staggering number broke the previous record of 4,432, set in 2019, CNN reported.

Pekoske attributed the record to an increase in the number of Americans who are armed.

“I think more people are carrying weapons, just generally across the country, and then whatever is happening across the country we see reflected in our checkpoints,” he said. “As a passenger, I don’t want another passenger flying with me with a gun in their possession.”

“No checkpoint, no airport is immune from having passengers try to carry guns through the checkpoint,” Pekoske said. “It does occur more frequently in again the states where gun carriage is at a higher rate compared to other states.”

As the holiday travel season approaches and COVID-19 restrictions ease on both domestic and international travel, the increase in guns found at the checkpoints could signal more delays for passengers who are caught in longer security checkpoint lines as they wait for local police to respond.

Passengers who bring a weapon to the airport could be fined starting at $2,500 for an unloaded weapon and up to $10,000 for a loaded one. For repeat offenders, the penalties are typically higher. Local authorities may also opt to file criminal charges and some areas including Pittsburgh, can revoke concealed carry permits for offenders who bring a gun to the airport.

CHICAGO — After a lengthy and at times tense day of testimony Tuesday, jurors in the Jussie Smollett trial are slated to hear from more prosecution witnesses Wednesday at the actor’s trial for allegedly orchestrating ...Read More

BALTIMORE — Even in a city hardened to senseless violence, the killing of Jacquelyn Smith was shocking.

The 54-year-old engineer at Aberdeen Proving Ground was stabbed in her chest while driving with her husband and ...Read More

The Santa Fe County Sheriff's Office released new documents Tuesday that shed more light on how live ammunition may have gotten on the set of the Alec Baldwin western "Rust" and then loaded into a Colt .45 single-action ...Read More

Donna Smith was vaccinated, booster shot and all, and ready to travel.

Then came reports a new fast-spreading COVID-19 variant, Omicron, raising the specter of a new wave of infections, hospitalizations and deaths.