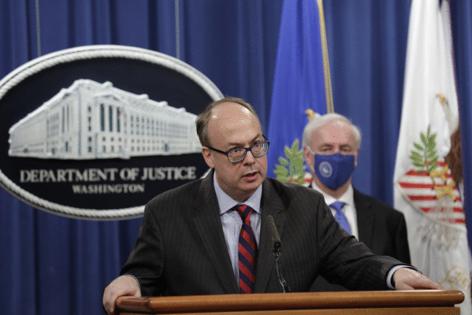 WASHINGTON — The House committee investigating the Jan. 6 attack on the U.S. Capitol subpoenaed a former Justice Department official described as being at the center of former President Donald Trump’s attempts to overturn the 2020 election results.

The subpoena issued Wednesday to Jeffrey Clark potentially sets up yet another legal showdown. Trump’s attorney has instructed other former Trump aides to not cooperate with the committee or comply with its subpoenas.

The committee is interested in Clark’s activities on behalf of Trump after his defeat by Joe Biden on Nov. 3. The subpoena to Clark instructs him produce records and give a deposition on Oct. 29.

“The Select Committee needs to understand all the details about efforts inside the previous administration to delay the certification of the 2020 election and amplify misinformation about the election results,” Rep. Bennie Thompson, a Mississippi Democrat who chairs the select committee, said in a statement. “We need to understand Mr. Clark’s role in these efforts at the Justice Department and learn who was involved across the administration.”

Some of Clark’s actions were outlined last week in a Senate Judiciary Committee interim report on Trump’s “relentless, direct pressure on the Justice Department.”

The Senate report noted Clark never agreed during its investigation to be interviewed. Now, the Jan. 6 committee is seeking to compel Clark’s testimony.

Earlier subpoenas have called for four former Trump advisers to sit for depositions on Thursday and Friday. But as of Wednesday there remained uncertainty over whether any of them would show. Meanwhile, committee members are promising to take whatever legal steps necessary to enforce compliance.

One of those four, Steve Bannon, who served as former president’s chief legal strategist and senior adviser, is refusing to cooperate with the House panel. His lawyer, Robert Costello, has written that the refusal comes at Trump’s request. Bannon had been ousted from a White House position in 2017 but stayed in touch with Trump.

The lawsuit accuses the ...Read More