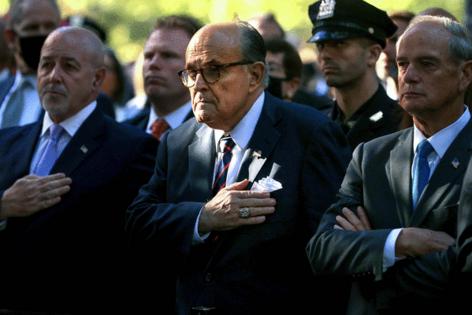 Rudy Giuliani, an ex lawyer for former President Donald Trump, has not appeared on the highly viewed cable channel for three months, according to Politico, which says Giuliani was slated to chat with Fox about the 20th anniversary of the Sept. 11 terror attacks that happened while he was mayor. Giuliani, 77, was reportedly notified of the change of plans on the eve of the anniversary.

Citing unnamed sources with knowledge of program booking, Politico claims the ban on Giuliani comes from top-ranking network brass. A source close to Giuliani, who was mayor of New York on Sept. 11, 2001, says Giuliani “is really hurt” because he intervened in negotiations between Time Warner and Fox boss Rupert Murdoch to bring the network to New York in 1996.

During the Trump administration, Giuliani was a regular Fox guest, sometimes pushing baseless allegations of election fraud that falsely argued that Trump won the 2020 presidential election. Dominion Voting Systems, which Giuliani has blamed in part for Trump’s loss, is suing Fox and Giuliani. Both parties are challenging the cases against them. Combined, those suits seek nearly $3 billion.

A New York appeals court suspended Giuliani’s law license on account of his efforts to overturn the results of the presidential election. He is also suspended form practicing law in Washington, D.C.

Bernie Kerik, who served as Giuliani’s police commissioner, told Politico he was “disappointed with the Fox coverage on the 20th anniversary of Sept. 11,″ citing Giuliani’s exclusion as an injustice, regardless the reason. He accused the right-wing outlet of “cowering to the far left.”

Kerik served time in prison for tax fraud and lying to Federal government officials before being pardoned by Trump. An aide for the former president told Politico that Fox isn’t doing “any favors” for fellow Trump aides trying to get airtime either.

Apparently Rudy isn’t the only Giuliani who hasn’t been able to get in front of Fox News’ sizable conservative audience. His son, Andrew Giuliani, a candidate for governor of New York, has also reportedly struggled for screen time.

That decision came from the top too, Politico reported, adding that Fox News did not address the former mayor’s standing at the network. A Fox rep told Rolling Stone that Andrew had not been banned and also took issue with Politico’s claim that his dad was booked on “Fox & Friends” on Sept. 11. They did not deny he was being shunned overall.