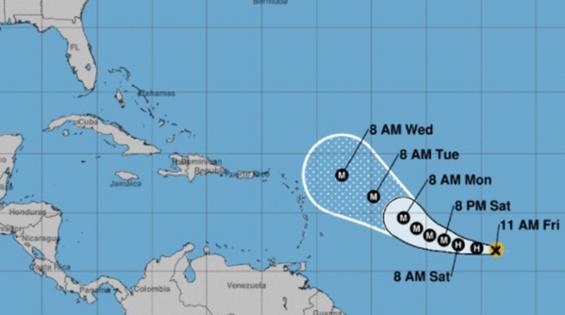 FORT LAUDERDALE, Fla. — Hurricane Sam, the seventh hurricane of the 2021 season, intensified to wind speeds of 85 mph Friday afternoon and is expected to continue gaining strength in the coming days, the National Hurricane Center said.

Sam could become a major hurricane by early Saturday, which means winds of at least 111 mph.

If Sam reaches that threshold, it would become the fourth major hurricane of 2021. And that’s not likely to be the end of its growth.

Sam is forecast to peak as a Category 4 hurricane, which means at least 130 mph winds, by Sunday or Monday, the center said.

“The large-scale environmental conditions all appear favorable for continued rapid intensification during the next day or so,” forecasters said.

Sam underwent rapid intensification, defined as a wind increase of at least 35 mph in a 24-hour period, over the previous 24 hours as it grew from a tropical depression into a hurricane.

Subtropical Storm Teresa, the 19th named storm of the season, formed 155 miles north of Bermuda. As of 5 p.m. Eastern time Friday, Teresa was moving northwest at 14 mph and is expected to turn north Saturday, according to the National Hurricane Center.

Teresa will not be around for long, though. The hurricane center said the system “will likely be the 9th so-called ‘shortie’ of the 2021 hurricane season — systems that are short-lived and relatively weak.” It is expected to dissipate within a few days.

It is still unclear whether Sam will affect Florida or any part of the United States. But forecasters said a fast-developing storm, which accurately describes Sam, raises the likelihood it will miss Florida.

U.S. models have the storm continuing to move west toward the Caribbean, but most projections have Sam pushing north just before making landfall in Dominica. European models have Sam making a more aggressive push into the Caribbean before turning north.

AccuWeather forecasters said Sam could run into disruptive wind shear next week if it takes a path near the Bahamas and Cuba.

“The faster that this system strengthens over the next few days, the more likely it is to re-curve east of Florida, and potentially well east of Florida,” according to AccuWeather meteorologist Randy Adkins.

“(However) if this storm takes a little while longer to organize and develop into a hurricane, then that will likely keep it on a track that’s farther to the south and likely increase the likelihood that Florida could see some impacts from this system.”

Adkins said any potential impact from Sam wouldn’t be felt for another week or so, during the first weekend of October.

Sam is the second earliest 18th named storm to form in the Atlantic basin, only behind the 2020 season.

A tropical wave is expected to roll off Africa’s west coast by end of the weekend. It’s forecast to move west at 10 to 15 mph and it has a medium chance of development in five days. The hurricane center said the system could turn into a tropical depression by the middle of next week.

Adkins expects hurricane season will remain busy for the next few weeks.

“There’s definitely precedent, and unfortunately it seems like last year is a relatively close match for this year in terms of how things have evolved,” he said in reference to the record 30 named storms of the 2020 hurricane season.

“Obviously, last year was a bit busier but we’re well above average already to date with this hurricane season. Given that, I would anticipate we’re going to have activity continue through the remainder of the month and into October.”

The wind shear that kept former tropical storms Peter and Rose from developing into stronger systems is expected to be weak for the next several days, which will support Sam’s development, as will warm water temperatures in the Atlantic.

“Rose and Peter were in a much more hostile environment, especially Peter,” said Dennis Feltgen, a meteorologist and spokesperson for the National Hurricane Center in Miami. “Sam will certainly be growing into a tropical storm, a hurricane and a major hurricane.”

The remaining storm names for the 2021 season are Teresa, Victor and Wanda, with more than two months to go.

Should we run out of storm names, late-season storms will no longer carry baffling Greek names like Zeta and Theta that were used last year. Experts have opted to use an overflow list of proper names instead. The list includes Adria, Braylen, Caridad, Deshawn, Emery, Foster, Gemma and Heath.

So far in the Atlantic hurricane season, which runs through Nov. 30, there have been 19 named storms, seven hurricanes and three major hurricanes.