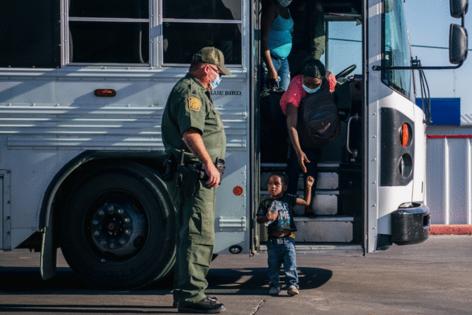 DEL RIO, Texas — Facing mounting political pressure from all sides over his handling of the border, President Joe Biden on Friday said the treatment of Haitian migrants this week was “beyond an embarrassment” and “dangerous.”

Biden promised consequences after an investigation into how Border Patrol agents on horseback confronted Haitian migrants, some appearing to swing their reins like whips. Officials later suspended the use of horse patrols near the camp.

“It sends the wrong message around the world,” Biden said. “It’s simply not who we are.”

Throughout history, waves of would-be refugees — Irish in the 1800s, Iraqis after the Sept. 11 attacks, Mexicans and Central Americans for decades — have encountered both hostile and welcome receptions upon setting foot in the United States.

But few groups have endured a less enthusiastic reception than Haitians, despite the pivotal role that the United States has often played in spurring people of the impoverished Caribbean nation to jump ship in the first place, say academic experts, activists and Haitian American community members.

Marleine Bastien, a longtime Haitian community activist and executive director of the Family Action Network Movement in Miami, maintains that racism and 50 years of failed U.S. foreign policy are at the root of the country’s humanitarian crisis.

“It’s U.S. foreign policies vis-à-vis Haiti that prioritize dictators, autocrats and corrupt leaders — some of them singlehandedly picked by the U.S. and ignoring the plight of the Haitian people,” she said. “As long as we continue failed policies, we will see this kind of tragedy and crisis at the southern border.”

That crisis exploded this week as images of horseback-mounted Border Patrol agents chasing down desperate Haitians flashed across the world, causing both adversaries and allies of the Biden administration to condemn the treatment of innocent men, women and children fleeing an earthquake-ravaged, politically unstable country in hopes of starting over.

A makeshift camp on the banks of the Rio Grande, once filled with 15,000 mostly Haitian migrants, had emptied by Friday morning. Homeland Security Department officials said that about two-thirds had arrived in family groups.